Three Thrillers/Suspense/Mystery: Do I Know You?, Everything We Didn’t Say, The Life She Wants #BookReview #Audiobook @HarperAudio @Bookouture

I do love a good mystery with suspense and twists and these three all fall into that category. I enjoyed them all, to varying degrees and recommend them as well. All were provided to me by the publisher at my request. The ratings and opinions shared are my own. 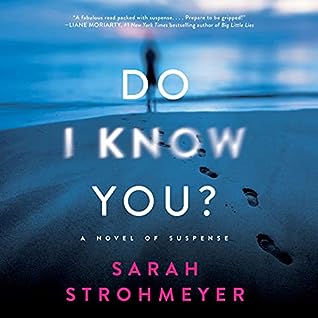 Jane Ellison has a rare ability to recognize people even when they are heavily disguised and her abilities have landed her a job at Logan Airport working for Homeland Security. She is known as a super recognizer. When Jane recognizes Bella Valencia moving through Logan, she confronts her about what happened to her sister Kit over a decade ago. She is immediately fired and blacklisted. Jane finds out that Bella is engaged to be married to rich and powerful Pease, and is sure the family has done this to protect a guilty Bella. Jane is sure that Bella has more information and is determined to infiltrate Bella’s and Will’s wedding to find out what happened to her sister.

This is a book that had it’s ups and downs for me. Jane is living with a University professor who always seems to treat her like she is beneath him, but she loves him. At times he looks like he is helping her, at others, not. I didn’t like him very much and because of that was frustrated with Jane as well. It seems like she did nothing to discover her sister’s killer for ten years, then suddenly became obsessed, once she saw Bella again. I can understand that as she has lost her job and has nothing else to occupy her mind. Parts of this story gripped me and other parts, were just meh. Once I got about halfway into it, I couldn’t stop and it got extremely suspenseful. My opinions and ideas completely flipped and had me wanting to do nothing else but listen. I guess what I am trying to say, is stick with it. The ending is strong and I loved the way the author ties up all the loose ends. The audiobook is narrated by a full cast and that always makes a story more interesting to me. They did a great job with the voices, accents and emotion in the story that kept me listening. 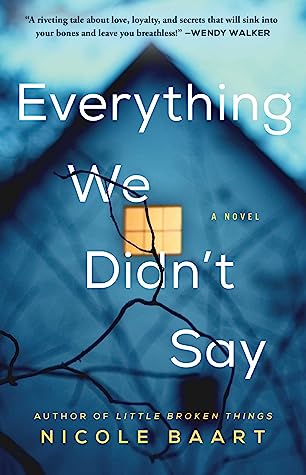 Everything We Didn’t Say by Nicole Baart

Juniper Baker was happy, in love with a local boy and had just graduated from high school when something terrible happened. Her neighbors, a friendly childless couple were brutally murdered and her brother was the number one suspect. She left Jericho, Iowa and promised never to return. Now she is back. She has returned to help her sick friend run the local library, but she is also back to try and forge a relationship with her teenage daughter, Willa, and to finally figure out who killed Cal and Beth Murphy. Shortly after arriving in town, her brother, Jonathan, falls through the ice on Jericho Lake and is in critical condition. Throw in someone doing a podcast, insistent that Jonathan is guilty and there is a lot happening in this sleepy little town.

This is the first book I have read by Nicole Baart, but I will be checking out her backlist. This book grabbed me from the start and I quickly devoured the pages to see how things would turn out. I loved Juniper’s character and was rooting for her in all areas. Jonathan was broken, the suspicions following him all his life, some thinking the fall through the ice was an attempted  suicide. The story was told in the present with flashbacks to 14 years ago. We learned more about the crime, the relationships and the family dynamics that way. The town was a typical small town with a rich family that seems to run things and those who work for them and support them, or those who dislike them immensely. There are some undertones that imply some involvement in the crime in the past. Also in the story is an environmental storyline about the water being contaminated by this family’s business and causing cancer in several residents. All storylines are pulled together in the end and I was left very satisfied. I did not have the suspect on my radar at all and the contamination story was very interesting in the way it wraps up. I do not want to give this story away, so will just say that it is well-developed with great characters (both those I like and those I didn’t). It was a puzzle with many pieces that the author moved deftly around the table before slotting them in. It is a family drama, slow burn mystery and has some suspense and edge of your seat moments, that will keep you turning the pages. I definitely recommend this one. 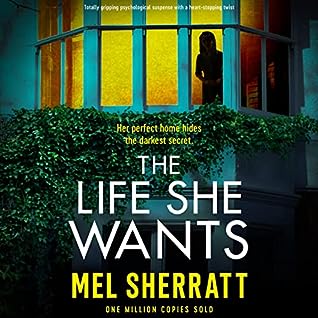 The Life She Wants by Mel Sherratt, Emma Gregory (Narrator)

I have read and enjoyed several of Mel Sherratt’s police procedurals and I was happy to see that this one was a thriller, something different, but also well done. Juliette and Danny move into a house in the country looking for a fresh start after losing their young daughter. They need a place to heal. Juliette meets Sarah, the woman who lives next door. Sarah and Richard are a solitary couple and don’t want anyone interfering with their lives. They aren’t worried after a dinner with Juliette and Danny. But, something is wrong in that house. There are secrets they are trying to keep quiet. When Juliette sees a young girl in their garden and starts to ask questions, things begin to unravel.

This is a story you need to go into knowing only a bit, so I am not saying anything more about the plot. I will say that there are some very unlikable characters, as well as some I felt a lot of sympathy for. Secrets abound and are revealed throughout the story. The story is told from various points of view and at times I had to figure out who was speaking, but as the story progressed, it became easier. There was also two timelines, but again, as I got more into the story, I was able to figure out what was happening. The final twists did not come as a surprise, but I definitely enjoyed how the plotlines came together in the end. I listened to the audiobook, narrated by Emma Gregory. This was my first encounter with this talented voice actress and I enjoyed her narration of the story. Using expression, tone and accents, she brought the characters to life for me. Overall, this was a very entertaining experience.

14 thoughts on “Three Thrillers/Suspense/Mystery: Do I Know You?, Everything We Didn’t Say, The Life She Wants #BookReview #Audiobook @HarperAudio @Bookouture”