I was never sure that the term “Home Child” meant, but now I do. These were children that were sent from their home country of England to have a better life in other countries. This story is set in Canada, my home, and it is one that I am not proud of. These children lived on the streets and were taken in to orphanages. When the orphanages became overrun and could not support all the residents, this was a solution that was supposed to offer these children a better life. When they arrived in Canada, they were not welcomed as children into a new home, but many were taken in as slave labour, purchased until they turned 18. There were certain things that were supposed to be offered to these children, but once they were in their new homes, many became subjects of abuse in different ways.

This is the story of Winnifred (Winny) Ellis, who sailed to Canada in 1936 with her brother and several friends. Once they arrived, they were separated and sent to live in various towns, in various roles and treated in very different ways. This was not an easy story to read. It was not all rosy and full of happiness. The story follows several characters from the trip over to Canada and into their adulthood. Unfortunately, they did not all reach adulthood and that was very emotional to read about. Winny kept a lot about her life a secret, even after she became an adult and a successful resident of the Toronto area. It was her great-grandchildren that convinced her to share her story and she does this in flashbacks. I do not want to give this story away, as it is one that I think anyone who enjoys Historical Fiction will enjoy. What I will say is that it was an emotional read. I became attached to these characters and I felt their pain. I did not know about the Home Children and I am ashamed to say that this is not a proud moment in Canada’s history, but one I think we should all know about. There is a bit of a happy ending to this story, so I was not left distraught, but I definitely needed tissues throughout this story. I listened to the audiobook narrated by Alana Kerr Collins and James Langton. Their narration was well done with the expression and emotion shining through. I felt like I was sitting with the characters and having them share this story with me. I definitely recommend this story and if you can listen to the audiobook, take the chance, it was a wonderful listen. I was gifted a copy of this book upon request. The rating and opinions shared are my own. 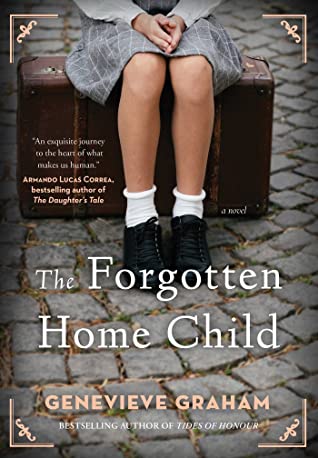 The Home for Unwanted Girls meets Orphan Train in this unforgettable novel about a young girl caught in a scheme to rid England’s streets of destitute children, and the lengths she will go to find her way home—based on the true story of the British Home Children.

2018: At ninety-seven years old, Winnifred Ellis knows she doesn’t have much time left, and it is almost a relief to realize that once she is gone, the truth about her shameful past will die with her. But when her great-grandson Jamie, the spitting image of her dear late husband, asks about his family tree, Winnifred can’t lie any longer, even if it means breaking a promise she made so long ago…

1936: Fifteen-year-old Winny has never known a real home. After running away from an abusive stepfather, she falls in with Mary, Jack, and their ragtag group of friends roaming the streets of Liverpool. When the children are caught stealing food, Winny and Mary are left in Dr. Barnardo’s Barkingside Home for Girls, a local home for orphans and forgotten children found in the city’s slums. At Barkingside, Winny learns she will soon join other boys and girls in a faraway place called Canada, where families and better lives await them.

But Winny’s hopes are dashed when she is separated from her friends and sent to live with a family that has no use for another daughter. Instead, they have paid for an indentured servant to work on their farm. Faced with this harsh new reality, Winny clings to the belief that she will someday find her friends again.

Inspired by true events, The Forgotten Home Child is a moving and heartbreaking novel about place, belonging, and family—the one we make for ourselves and its enduring power to draw us home.

13 thoughts on “The Forgotten Home Child by Genevieve Graham #BookReview”