Gore in the Garden (Washington Whodunit #5) by Colleen J. Shogan 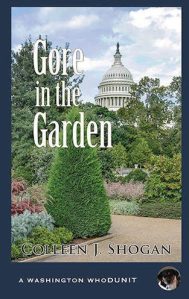 Gore in the Garden (A Washington Whodunit #5)

Synopsis: After her boss narrowly escaped political defeat, Kit Marshall is settling into life as a busy congressional staffer. While attending an evening reception at the United States Botanic Garden, Kit’s best friend stumbles upon the body of a high-ranking government official. The chairwoman of a congressional committee asks Kit to investigate, and she finds herself once again in the thick of a murder investigation. The complications keep coming with the unexpected arrival of Kit’s younger brother Sebastian, a hippie protestor who seems more concerned about corporate greed than the professional problems he causes for his sister. To make matters even worse, the romantic lives of Kit’s closest friends are driving her crazy, diverting her attention from the mystery she’s been tasked to solve. The search for the killer requires her to tussle with an investigative journalist right out of a noir novel, a congresswoman fixated on getting a statue of James Madison installed on the Capitol grounds and a bossy botanist who would do anything to protect the plants he loves. When the murderer sends a threatening message to Kit via a highly unusual delivery mechanism, Kit knows she must find the killer or risk the lives of her friends and loved ones.

A few years ago, I read the second book in this series and I really enjoyed it, not sure why it has taken me this long to get back to this series. A lot has happened in the last couple of books, but it didn’t interfere with my enjoyment of this story. Kit Marshall is the chief of staff for Congresswoman, Maeve Dixon. Kit, her friend and co-worker Meg, her husband Doug, and her brother Sebastian attended a reception at the United States Botanic Garden to witness the blooming of the corpse flower. Kit’s boss is on the committee that oversees the garden. As they are leaving the Garden, Meg runs back inside to the washroom. When her loud screams are heard, they run back into the building where they find the Architect of the Capitol dead. Kit, having solved several murders in the past, is voluntold to act as liaison between the police and her boss as well as to conduct her own investigation. There are a lot of others things happening in her life, specifically dealing with her brother who becomes part of a couple of protests that target Congresswoman Dixon’s office, there are conflicts between some staffers in her office and Meg’s love life that all take up some of her time. As her investigation continues, Kit needs to stay ahead of the killer or she might become the next victim.

Colleen Shogan worked on Capital Hill in the past and her knowledge really adds to this story. Learning about tunnels, statues, and buildings I did not know about as well as the various positions and hierarchy, all blend in with the fiction to give this a very realistic yet entertaining vibe. I enjoyed the characters in this story, both main and secondary. Kit is a great protagonist, smart, friendly, diplomatic yet also fun and loving. I loved her dog Clarence, he was quite a character. He plays quite and important role in the story. Kit has a whole team to help her solve this murder. She uses Meg, Doug and Trevor, an old friend who also works on Capital Hill. They all pull together to figure out who the murderer was. With plenty of suspects and a few red herrings, Kit had her work cut out for her. The story was very well-written with all the sub-plots coming together nicely at the end. This is a great whodunnit that will have you guessing until the end. I definitely recommend this Capital Hill Cozy Mystery especially if you like a bit more meat to your cozy. I received a copy of this book from Great Escapes Virtual Book Tours upon request. The rating, ideas and opinions shared are my own.

Colleen J. Shogan has been reading mysteries since the age of six. She conceived of the plot of her first mystery, “Stabbing in the Senate,” one morning while taking a walk in her suburban Washington, D.C. neighborhood. A political scientist by training, Colleen has taught American politics at Yale, George Mason University, Georgetown, and Penn. She previously worked on Capitol Hill as a legislative staffer in the United States Senate and as the Deputy Director of the Congressional Research Service. She is currently a senior executive at the Library of Congress who works on great initiatives such as the National Book Festival. Colleen lives in Arlington, Virginia with her husband Rob and their beagle mutt Conan. Colleen’s first book won the Next Generation Indie Prize for Best Mystery. Her books have been RONE and Killer Nashville finalists in the mystery category.

10 thoughts on “Gore in the Garden (Washington Whodunit #5) by Colleen J. Shogan”