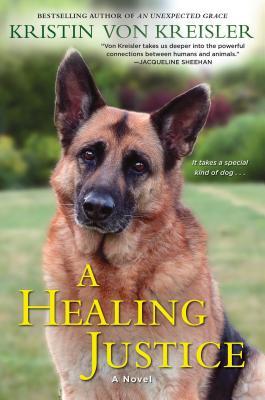 Yes, I picked this book because of the cover, but I am so glad that I did.  I am not exactly sure what genre this fits into. It is a detective/K-9 story but there is a mystery, a bit or romance and a lot of self-doubt and deprecation. Andrea is a hard working police detective who works with her K-9 dog, Justice. Justice showed up at her home two years earlier and she worked with him to train him to become a drug sniffing dog. One night when they return home, Justice takes off barking into the woods beside their home. With a high pitched shriek, Justice is stabbed and the person who did it comes after Andrea. She has to protect herself and make a split second decision. Andrea’s life is about to change big time because the attacker was a teenager and neighbor, and she is now being charged with murder in the media and the public. Andrea is relieved of duty while Tom, a deputy sheriff, investigates the event to see if it is a justified shooting or not.

The story alternates between Andrea and Tom’s point of view. The neighbor who she barely knew stabbed Justice before charging at her with his knife, and she doesn’t understand why he would have done this. Then we have to deal with the reality that is the public and the media, the human rush to judgement. With a few keystrokes, the press has Andrea as the perpetrator and the attacker is now the victim. Even the shell-shocked Andrea has her doubts and questions her reaction. Tom worked very hard to remain fair and unbiased, even though there was some history between them. I felt so bad for Andrea. She had so much dou

bt about her actions and whether or not she made the right decision. She was also heartbroken about the injuries to Justice. She was a good cop, who worked hard to do what is right and she has her heart ripped out. This book brings up a lot of questions about the media and how they spin popular opinion. The issue of victim and perpetrator and who decides which role is which. Death by cop or abuse of power by police officers. There are a lot of things to think about in this book, one that I felt was not really dealt with is the fact that as a K-9, Justice is a police officer, yet that did not seem to be a factor in the unravelling of the shooting. I really enjoyed the story and just wished there were some things addressed after the conclusions found by the investigation. The publisher, Kensington Publishing, generously provided me with a copy of this book upon my request. The rating, opinions and ideas shared are my own.

About the Book (From Goodreads): From the bestselling author of Earnest and An Unexpected Grace comes a novel about a woman, a dog, and the hope and love that can emerge from tragedy . . .

Two years ago, police officer Andrea Brady fell madly in love with a black-muzzled, slightly rumpled German shepherd who showed up at her house one misty autumn day. Now, with the brave and intuitive Justice as her expert K-9 drug sniffer, she’s found an unbeatable partner. Then the unthinkable happens. A savage attack leaves a teenager dead and Andie trapped in every cop’s worst nightmare. Placed on administrative leave, she’s pursued by media and investigated by a deputy sheriff whose handling of the high-profile case could earn him a coveted promotion.

Haunted by self-doubt, Andie is in danger of losing everything–her career, her freedom, and the critically injured dog who’s her soul mate. But as she finds kind allies in her Puget Sound island community, the road back becomes a journey of healing for both Andie and her canine companion. And Andie learns important lessons about justice–and about Justice–as she struggles to find the courage to forgive herself and reclaim the gift of her life . . .

About the Author: Kristin von Kreisler was born on October 4, the feast day of St. Francis of Assisi, and all her life she has loved and rescued animals. She writes bestselling books about them and has spoken about their welfare on Coast to Coast to 560 U.S. cities and on the Voice of America to 123 million people.

Her most recent novel, A Healing Justice, tells the story of a woman police officer and her K-9 German shepherd after a brutal attack. Kristin’s other novels are Earnest, about a couple in conflict over custody of their Labrador retriever, and An Unexpected Grace, about a woman and a golden retriever helping each other recover from violence and abuse. A memoir, For Bea, is about Kristin’s beagle who came from a medical lab and influenced her to become an animal writer. Her award-winning books have been translated into ten languages.

Kristin lives on an island in Washington, where, she says, she’d rather work in her garden than breathe. Her kale grows to looming giants, and her lavender and catmint are sirens calling bees. From her desk she watches ospreys and seals, and every hour a ferry passes by. She and her husband have just renovated a historic Victorian farmhouse, where the island’s first postmistress and sheriff once lived with their seven children.

10 thoughts on “A Healing Justice by Kristin von Kreisler”