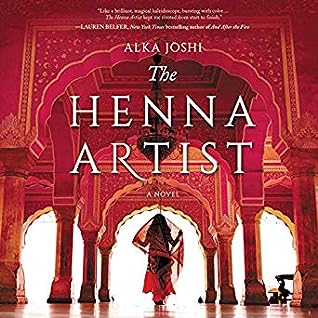 The Henna Artist is set in 1950s India, where we meet Lakshmi, a henna artist. Lakshmi had married at 15, in an arranged marriage. Her mother-in-law was a healer and she taught Lakshmi about folk cures and the properties of various herbs. Lakshmi’s marriage was not a happy one and she was being physically abused by her husband. She escapes the marriage when she is 17 and after moving to Jaipur, she establishes herself as a henna artist for wealthy women. The job included much more than painting, she was also part therapist/part masseuse. She was also well known for her herbal remedies and was often called upon when an abortion was needed. She had other talents including arranging marriages, helping women get pregnant, and assisting with depression. She was well paid for her various services and eventually saved enough money to build her own house, until her younger sister appeared on her doorstep and changed both of their lives.

I enjoy historical fiction, especially if I learn something new that I was not aware of. This book was quite eye opening to me about the caste system, the way women were treated as well as learning about the art of henna painting. The interesting well-developed characters and the well-written and descriptive writing held my interest right from the first page of this story. I was captivated by this story and the lives of the characters within it. Lakshmi was an amazing character. She was strong, smart, and so deserving of everything she had earned. Her young sister Radha on the other hand, was very frustrating. I know she was young, but she seemed very ungrateful and might have had a different path if she had only talked to Lakshmi. There were many other secondary characters, some that played very important roles in the story, some villains, some very helpful. I was fascinated by the herbal medicine in this book. It was great that the author combined it with traditional medicine when necessary. This is a story that I will ponder for awhile. There is a lot to think about and a lot that I want to research a bit more. This is one that I definitely recommend.

I was fortunate to listen to the audiobook narrated by Sneha Mathan. I really enjoyed her performance. She brought a voice to Lakshmi that made it feel like I was experiencing the story, not just reading it. I loved listening to the pronunciation of many of the words that I may not have known. Her pacing, expression and various voices was spot on. I definitely recommend that you listen to the audiobook if you are able. 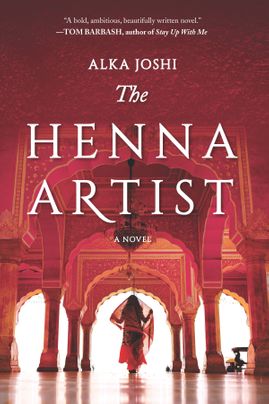 About the Book:Trusted with the secrets of the wealthy, she can never reveal her own…

Escaping from an arranged and abusive marriage, seventeen-year-old Lakshmi makes her way alone from her 1950s rural village to the vibrant pink city of Jaipur. There she becomes the henna artist—and confidante—most in demand to the wealthy women of the upper class.

Known for her original designs and sage advice, Lakshmi must tread carefully to avoid the jealous gossips who could ruin her reputation and her livelihood. As she pursues her dream of an independent life, she is startled one day when she is confronted by her husband, who has tracked her down these many years later with a high-spirited young girl in tow—a younger sister Lakshmi never knew she had. Suddenly the caution that she has carefully cultivated as protection is threatened. Still she perseveres, applying her talents and lifting up those who surround her as she does.

Vivid and compelling in its portrait of one woman’s struggle for fulfillment in a society pivoting between the traditional and the modern, The Henna Artist opens a door into a world that is at once lush and fascinating, stark and cruel.