A Family of Strangers by Emilie Richards #JIAM 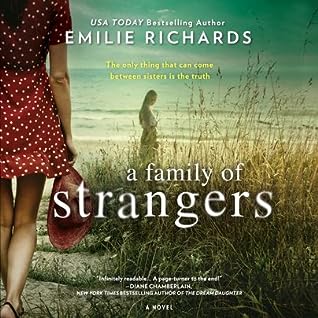 A Family of Strangers by Emilie Richards

I had read a few of Emilie Richards previous books and had expected a women’s lit book here, but boy was I surprised. This was a mystery and family drama that I enjoyed overall. I listened to this book, so it was long at over 14 hours. There were parts of the story that were slow, but in the end, it all came together in a satisfying mystery.

Ryan and Wendy are sisters that are extremely different. Wendy is married with two adorable young children, a job working at her father’s company and was always the favourite of her parents. Ryan was the afterthought. Born when Wendy was 18, her parents were always somewhat indifferent. She is a true crime podcaster, who suffered a huge loss, when her boyfriend was shot years ago trying to defend her. He was a canine officer who had warned her not to meet with someone and it ended up badly. Although he survives, her told her never to contact him again and she hasn’t, neither has she had any other relationships. When she gets the call from her sister to go look after her girls, she knows she has to go. Using her skills and an investigative reporter, as well as the skills of her co-workers, she begins to investigate what her sister is involved with.

I did not like Wendy from the get-go. Of course, I’m sure that is what Emilie Richards intended. As Ryan finds out more about her sister, I disliked her even more. Ryan is a great character. She is flawed and has a lot of anger and baggage. As the story progresses, she grows immensely and becomes my favourite character by the end of the story. Noel and Holly, the two girls are sweethearts. They are struggling with the loss of both parents, mom has disappeared and dad is in the armed forces commanding a sub, so they have a lot to deal with. They are not the easiest to get to know as they are quiet, angry and secretive, but as they get to know Ryan, they open up and become the sweet children they should be. The mystery is a bit predictable at times, but with twists, it goes off on a tangent that I had not expected. Ryan also has a second chance with her one and only love and that does not go smoothly, but I enjoyed that storyline.

Overall, I enjoyed this book. It is a story about families, their secrets, their relationships and their mysteries. It is a domestic drama with a dysfunctional family, with a lot of baggage. Finally it is a mystery involving sisters and others who love them. It begs the question, “How far will you go to protect family members?” I do recommend this book to anyone who enjoys mysteries, family drama and psychological suspense.

I listened to the audiobook of A Family of Strangers, narrated by Vanessa Johansson. She does a good job differentiating between the various characters, young and old, male and female. She maintains a good pace with appropriate expression using intonation that allowed me to picture the characters. This is the first book I have listened to narrated by Ms. Johansson, but I would happily listen to more. She has a pleasant voice and this was a great voice performance. I received a copy of this audiobook from the publisher upon my request. The rating, ideas and opinions shared are my own.

All her life, Ryan Gracey watched her perfect older sister from afar. Knowing she could never top Wendy’s achievements, she didn’t even try. Instead, Ryan forged her own path while her family barely seemed to notice.

Now, Wendy shares two little girls with her perfect husband while Ryan mourns the man she lost after a nearly fatal mistake in judgment. The sisters’ choices have taken them in different directions, which is why Ryan is stunned when Wendy calls, begging for her help. There’s been a murder – and Wendy believes she’ll be wrongfully accused.

While Wendy lays low, Ryan moves back to their hometown to care for the nieces she hardly knows. The sleuthing skills she’s refined as a true-crime podcaster quickly rise to the surface as she digs for answers with the help of an unexpected ally. Yet the trail of clues Wendy’s left behind lead to nothing but questions. Blood may be thicker than water, but what does Ryan owe a sister who, with every revelation, becomes more and more a stranger?

Is Wendy, who always seemed so perfect, just a perfect liar – or worse?

13 thoughts on “A Family of Strangers by Emilie Richards #JIAM”