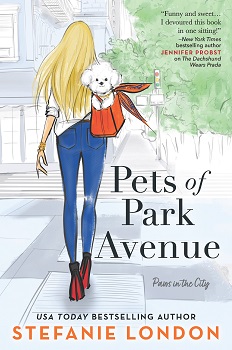 About the Book: The perfect romcom for dog lovers! Pets of Park Avenue is the story of a self-confessed hot mess who learns that life is more fun when things don’t go according to plan.

What do you do when The One is also the one who broke your heart?

Self-proclaimed hot mess Scout Myers is determined to prove she’s finally got her act together. Raised by grandparents who saw her as her wayward mother’s wayward daughter, Scout’s used to being written off. So when the opportunity for a promotion arises at Paws in the City, the talent agency where she works, Scout is desperate to rise to the occasion. With shared custody of her little sister also on the line, Scout can’t afford a single mistake…like suddenly needing a canine stand-in for an important photoshoot. Luckily (or not) she knows the owner of the perfect pup replacement: the estranged husband she walked out on years ago.

On the surface, it appears Lane Halliday’s life has been blissfully drama free without Scout, but she suspects her handsome-as-ever not-quite-ex-husband doth protest too much. Working together even feels like old times—except for all that lingering, unresolved tension. But Scout’s not sure she’s ready to confront the reasons she left Lane, and when their plans to finalize the divorce become very real, Scout starts to wonder whether second chances might be worth a little hot mess.

Paws in the City – standalone
Book 1 – The Dachshund Wears Prada

I really enjoyed the first book in the Paws in the City series, The Dachshund Wears Prada, so was looking forward to another fun romance starring, adorable animals. Pets of Park Avenue is Scout’s story. We met Scout in the first book, Isla’s best friend. In this book, Scout is trying to prove herself to Isla, hoping for a promotion down the road. Her younger sister lives with her grandparents, but she is hoping to get custody of her and needs to be able to show that she can support her. When disaster strikes at a photoshoot, Scout suggests they get her estranged husband to allow them to borrow his dog. Scout walked out on her husband Lane, five years ago, but she still loves him. When they see one another for the first time in five years, it doesn’t take long for the feelings to rise to the surface. Lane has issues and there were things that happened when they were together that had never been dealt with. When they decide that it’s time to make their divorce final, Twinkle Stardust, yes, that is the little bichon frise’s name, has a meltdown and Lane knows he needs to cut ties for good.

I really enjoyed this contemporary romance. Scout is a mess. She is scattered, nervous, has low self-esteem and is constantly trying to prove herself. We learn about her past and it is sad indeed. I am surprised she is as put together as she is. She loves animals and really enjoys her job, so when she thinks she is in danger of losing it, she thinks outside the box to fix things. I was surprised to hear about her marriage and lack of divorce after five years. Lane is also a character with a lot of baggage. It is obvious to the reader how much they love each other, but they need to work though all the things that caused their marriage to end if they want to move on. I loved Star, aka Twinkle Stardust. She had a lot of feelings around the situation as well, with Scout there, leaving, back, leaving etc. The humor in the story is all around the animals and it did make me laugh. This was an extremely emotional second chance romance. There are themes of abandonment, insecurity, family issues, trust and honesty. It was nice to see the characters from the previous story and catch up on their lives as well. There are a few steamy scenes, but they were not too detailed and I was able to skim them and still very much enjoy the story. If you enjoy a second chance romance with some steam, some issues, adorable animals and family, then I recommend you pick this one up.

How do you come up with your themes?

I’m not sure that I consciously determine themes for my stories, but more that they tend to emerge as I’m writing the first draft. I’m an intuitive writer, which means the only way for me to really get to know the characters and the plot is to put my fingers on the keyboard and let the story flow. This means I don’t always know exactly how a story is going to turn out until it’s done, and I usually have an “aha!” moment about 75% through where I finally understand the core elements of the book. Then the rounds of revisions are often dedicated to make those themes and elements shine as much as possible.

What is the attraction to writing/reading about women’s friendships?

I’m blessed to have many amazing women in my own life, and I think female relationships of all kinds are super important. It saddened me for a long time to see women get pitted against one another in television and movies, and I’ve always wanted to write the kind of books that lift women up rather than tear them down. It’s not to say every woman I write is sunshine and roses, though! But I strongly believe in showing female relationships as honest, complex, and supportive. One of the best things about writing the Paws in the City series is all the different female friendships and sister relationships… after writing the adorable animal side characters, of course!

Which comes first: characters or plot?

It depends on the project. Sometimes I have an idea for a story concept that pops into my head and then I think about the characters who might end up in that situation. This was the case for The Dachshund Wears Prada, where I had the idea for a woman who ends up being an assistant to a very pampered pooch, and then Theo and Isla came to me later.

But sometimes the characters come first, especially for later books in a series where I’ve “met” the characters in an earlier book but don’t always know what their story is yet. Those characters tend to become very real in my head and then I need to think about a story that would suit their personality and the kind of development arc I would like them to have.

Have you ever been writing a novel and realized the theme is very much like something you’ve experienced?

I write from the heart, so on some level I think all my books have a theming element that is close to some emotion or experience I’ve had myself. When it comes to writing fiction, I try to make those elements bigger and more interesting than real life, but at the core I have experienced a lot of the same doubts, fears and insecurities as all my characters.

For example, I’ve written about characters who’ve struggled for acceptance (whether internal or external), characters who’ve felt lonely or who’ve moved away from their families, who’ve been afraid to bet on themselves or to take risks. I’ve written about grief, about being a plus size woman, about the pressures of having a creative career, about learning to find your voice in the world… these are all things close to my heart and my own experience.

About the Author: Stefanie London is a USA Today Bestselling author of contemporary romance. Her books have been called “genuinely entertaining and memorable” by Booklist, and her writing praised as “elegant, descriptive and delectable” by RT Magazine.

Originally from Australia, she now lives in Toronto with her very own hero and is doing her best to travel the world. She frequently indulges her passions for lipstick, good coffee, books and anything zombie related.