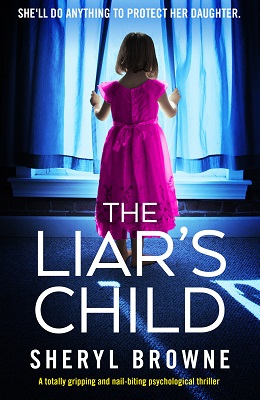 Happy Book Birthday to Sheryl Browne on the publishing of The Liar’s Child today.

The Liar’s Child by Sheryl Browne

About the Book: I’ll do anything to protect my daughter…

When I pick my beloved daughter Poppy up from school one afternoon, my mind races when I see the little girl holding Poppy’s hand. With the same heart-shaped face, long brown hair and dark eyes, the two girls look identical. In fact, they look like sisters.

Is the secret I’ve been holding on to for so long about to be revealed?

That night, I cuddle Poppy even harder, desperately trying to decide what to do. And then my husband’s phone vibrates. A message. And then another. And another. All from a number I don’t recognise.

Is someone going to tell my husband what I did? Could I be about to lose everything I have worked so hard to protect?

But I’ve spent so long hiding the truth, I never stopped to wonder if I was the only liar in the family… The only thing I’m sure of is that nobody is going to take my child away from me.

If you can’t get enough of addictive psychological thrillers like Gone Girl, The Wife Between Us and The Marriage, you’ll love The Liar’s Child. With nail-biting suspense and an ending that will make your heart pound, this is one book you simply won’t be able to put down.

I was gripped from the start of The Liar’s Child. First we have Poppy, a 5 year old girl with a serious health issue. Her parents, Matt and Kay are going through tests, to determine what has caused her kidney problems and to get tested to see if they were eligible donors if and when she might need a transplant down the road. This aspect of the story was heartbreaking and I felt bad for this young family. When Matt finds out he does not have the right blood type, his suspicions ramp up. When Kay meets Amelia, a new student, she gets a bad vibe. We now have a vicious circle, Matt thinks Kay is having an affair with his brother and Kay thinks Matt is having an affair. Then we find out about Olivia, Poppy’s new BFF who looks so much like her that Kay is sure they are half sisters. Oh my, who is the liar in the title?

I had a lot of feelings in this story. I can only imagine what parents feel when their child is dealing with a serious illness that could lead to premature death. I liked Matt at first. A dedicated doctor who loved his wife and daughter, but he sure jumped to conclusions fast enough that I wanted to smack him and tie him in a chair to force him to talk Kay. Of course, she wasn’t much better, making assumptions without talking to Matt. Having an ulterior motive to save her daughter had something to do with her bad decisions, but again, talk to each other for Pete’s sake. Sheryl Browne has penned a very well written and plotted story. The characters are very well developed. Yes, they are flawed and keeping secrets, but they are relatable. Add in the possibility of infidelity, sibling rivalry, secondary characters trying to weasel their way into their lives and the reader isn’t sure who is telling the truth, if either of them are. I loved Poppy. She was so sweet and loving and I wanted everything to work out for her. This book is a family drama, a medical mystery and a domestic thriller/suspense all well meshed together to bring me a story that I couldn’t put down once I started. If you enjoy a story with a lot of balls in the air, this one is for you, a story that is frustrating and gripping at the same time. I highly recommend it.

About the Author: Sheryl Browne writes psychological thriller and edgy contemporary fiction. A member of the Crime Writers’ Association, Romantic Novelists’ Association and awarded a Red Ribbon by The Wishing Shelf Book Awards, Sheryl has several books published and two short stories in Birmingham City University anthologies, where she completed her MA in Creative Writing.