Throwback Thursday meme is hosted by Renee@It’s Book Talk and is a way to share some of your old favorites as well as sharing books that you’re FINALLY getting around to reading that were published over a year ago. This week, I am sharing a book that was published back in 2015 and I have had it on my TBR since then.

The Edge of Lost by Kristina McMorris, Narrated by Charlie Thurston

On a cold night in October 1937, searchlights cut through the darkness around Alcatraz. A prison guard’s only daughter—one of the youngest civilians who lives on the island—has gone missing. Tending the warden’s greenhouse, convicted bank robber Tommy Capello waits anxiously. Only he knows the truth about the little girl’s whereabouts, and that both of their lives depend on the search’s outcome.

Almost two decades earlier and thousands of miles away, a young boy named Shanley Keagan ekes out a living as an aspiring vaudevillian in Dublin pubs. Talented and shrewd, Shan dreams of shedding his dingy existence and finding his real father in America. The chance finally comes to cross the Atlantic, but when tragedy strikes, Shan must summon all his ingenuity to forge a new life in a volatile and foreign world.

Skilfully weaving these two stories, Kristina McMorris delivers a compelling novel that moves from Ireland to New York to San Francisco Bay. As her finely crafted characters discover the true nature of loyalty, sacrifice, and betrayal, they are forced to confront the lies we tell—and believe—in order to survive. 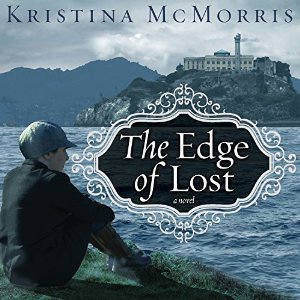 I have had this book on my shelf for several years and when I saw that my library had the audiobook, I decided it was time to listen to it. I am so glad I finally did. The book opens on Alcatraz, with the warden’s child missing. A prisoner, who works as the gardener, knows something, but what? We are then whisked off to Ireland several decades earlier where we meet Shanley Keagan, a young boy. This is his story. On the way to America, Shan’s uncle dies and he is taken in by an Italian family after meeting their son, Nick Capello. He lives with the Capello’s for many years, but a situation has him leaving them and falling back on his skills of impersonations, jokes and entertaining. I do not want to say anything else about the plot, but let me tell you, Shan does not get a fair shake in life.

I very quickly connected to Shan. He wormed his way into my heart and had my emotions all over the place. It wasn’t easy to be an immigrant, especially one from Ireland back in the twenties. Kristina McMorris does an amazing job of weaving the two storylines together to give us an amazing picture of Shan, and what his life was like. He spent his whole life in America trying to repay the Capello family for what they did for him, and he would do whatever he had to for them. This is an emotional story, one where I fell in love with the big hearted character. I wanted to smack Nick more than once for things he did and decisions he made that affected the whole family, especially Shan. This was an excellent story and I recommend it to anyone who enjoys a good historical fiction story.