Chance of a Lifetime by Jude Deveraux, Tara Sheets #BookReview 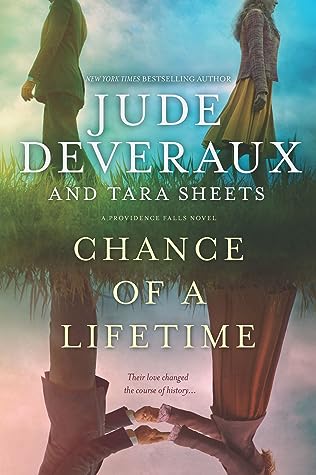 Chance of a Lifetime by Jude Deveraux, Tara Sheets

When checking out reviews, I saw that many people were not happy with this book. I think those who have only read her newer books might be. I read Jude Deveraux years ago when she wrote about the highland rogues, time travel etc. so this harkened back to those days for me. I did have one big niggle which you will see in my review, but overall, I enjoyed this one.

Chance of a Lifetime by Jude Deveraux and Tara Sheets is the first novel in the Providence Falls series. This book takes me back to older novels by Jude Deveraux which I really enjoyed. I will get the negative off my chest first, this one ends leaving this reader wanting to know what is happening next? There isn’t a conclusion to the story, it is a “To Be Continued”, which I do not like. If it was a television series, it would continue the next week, but with a book it is sometimes a year and by then, I don’t remember everything that happens.

Okay, now on to what I liked. This is a dual timeline story, but it is the same characters in both times as it is a reincarnation story. Liam and Cora fell in love back in 1844 and he has been trying to find her and get back together ever since. In this life, they are both police officers. I enjoyed the characters, especially Liam. He has been a thief many times over, a handsome charmer and a bit of a cad. This story contains humor, mystery, crime, and drama. I haven’t really seen the romance yet, although I know that Liam is in love. Then we throw in two angels/judges who are supposed to keep Liam on track, you see his role is to bring Cora together with someone else, also around in their past. I really enjoyed this one, until it ended and I was left hanging, as I mentioned earlier.Jude Deveraux and Tara Sheets combine history, romance, mystery, and heavenly intervention into one engaging tale. I do recommend this one, but you might want to wait until the second book comes out so you won’t be left hanging too long. I was gifted a copy of this book upon request. The rating and opinions shared are my own.

About the Book (From Goodreads): In one century she loved him madly, and in another she wants nothing to do with him

In 1844 Ireland, Liam O’Connor, a rogue and a thief, fell madly in love with a squire’s daughter and unwittingly altered the future. Shy and naive Cora McLeod thought Liam was the answer to her prayers. But the angels disagreed and they’ve been waiting for the right moment in time to step in.

Now Liam finds himself reunited with his beloved Cora in Providence Falls, North Carolina. The angels have given Liam a task. He must make sure Cora falls in love with another man—the one she was supposed to marry before Liam interfered. But this Cora is very different from the innocent girl who fell for Liam in the past. She’s a cop and has a confidence and independence he wasn’t expecting. She doesn’t remember Liam or their past lives, nor is she impressed with his attempts to guide her in any way.

Liam wants Cora for himself, but with his soul hanging in the balance, he must choose between a stolen moment in time or an eternity of damnation.

19 thoughts on “Chance of a Lifetime by Jude Deveraux, Tara Sheets #BookReview”