Pam Ayres – Down the Line by Pam Ayres #AudiobookReview 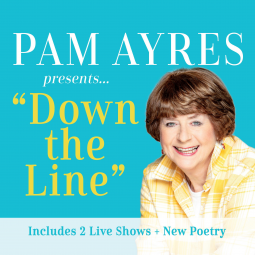 If you are looking for a way to have an amusing few hours, you need to grab this audiobook. I laughed so hard. It was like hearing a live performance (wait, it was) made up of irreverent and amusing poetry.

I had not heard of Pam Ayres, but Nicki, over at Secret Library Book Blog reviewed it and I had to give it a listen. Well, she is hilarious. Not only do we hear her poetry, but the background of why she wrote it (sometimes funnier than the poem itself) and incidents that occured when she read it performed it. This is a relatively short listen, but I know I will listen to it again. A great way to lift the doldrums.

Thanks to NetGalley and W. F. Howes Ltd for my digital copy via the NetGalley app. The rating, ideas and opinions shared are my own.

Synopsis: After a 40 plus years’ career, and 10 years on since Pam Ayres’ last live recordings were released, Pam’s latest audiobook brings together two recent live recordings of her solo stage shows, one at London’s Cadogan Hall and the other at the Regent Centre, Christchurch. Pam introduces each recording and then, as a bonus, reads many of her poems which have not been previously recorded from her two most recent books, You Made Me Late Again and Up in the Attic.

With poems such as ‘My Mother Was Right About You’, ‘Geriatric Juliet’, ‘Poor Old Father Christmas’, and ‘The Hat From Hell’, blending Pam’s characteristically sharp wit with her warm, comic observations on everyday life, this hilariously funny collection is a must-have for seasoned fans and first time listeners alike. It also includes some of Pam’s more reflective poems including the title poem, ‘Down the Line’, which she wrote for the 100th Anniversary of the end of the First World War.