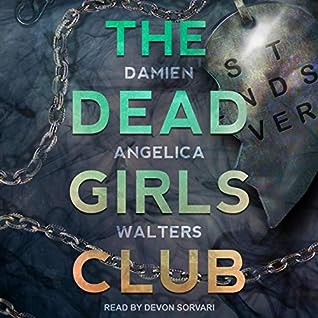 In 1991, Heather Cole and her friends were members of the Dead Girls Club. They snuck into an old house that had been up for sale for quite a while. They would tell stories about death, imaginary spirits and ghosts. The one that led to death was the Red Lady, the spirit of a vengeful witch killed centuries before. Red Lady, Red Lady, show us your face… Heather knew the stories were made up to scare them, that is, until her best friend Becca began insisting the Red Lady was real–and she could prove it. Becca lived a very sad life, abused by her mother and with very few friends. Could the Red Lady save her?

The story is told in a dual-timeline, which is one I do enjoy. When Heather received a necklace in the mail, it sends her spiraling backwards to the fateful occurrence from years before. There is a bit of suspense, some mystery and a lot of angst that I was not looking for in this story. This is a genre I don’t usually read, but it sounded fun. I remembered similar stories from my youth, only our was called “Bloody Mary” so I thought it would remind me of those simpler times. Well, it was not really what I was looking for. I finished this one, but it was really not my cup of tea. It has received mixed reviews, so I can only say, to give it a try if the synopsis interests you, it might be just what you are looking for. The narration of this one was hit and miss for me. I enjoyed the simple narration, but when Devon Sorvari did a voice for Becca, it was creepy. It reminded me of the exorcist. The other voices were all fine, so perhaps that was what she was going for. The pacing and expression were right on. I have listened to other books she narrated and enjoyed them, so perhaps it was a combination of the story and that one voice that has me saying “meh”. I received a copy of this book from the publisher upon request. The rating, ideas and opinions shared are my own.

Synopsis (From Goodreads): In 1991, Heather Cole and her friends were members of the Dead Girls Club. Obsessed with the macabre, the girls exchanged stories about serial killers and imaginary monsters, like the Red Lady, the spirit of a vengeful witch killed centuries before. Heather knew the stories were just that, until her best friend Becca began insisting the Red Lady was real–and she could prove it.

It’s been nearly thirty years, but Heather has never told anyone what really happened that night–that Becca was right and the Red Lady was real. She’s done her best to put that fateful summer, Becca, and the Red Lady, behind her. Until a familiar necklace arrives in the mail, a necklace Heather hasn’t seen since that night.