Top Ten Tuesday was created by The Broke and the Bookish and is now hosted by That Artsy Reader Girl. Each week a new theme is suggested for bloggers to participate in. This week is a freebie. I thought about is sitting in the heat and humidity of summer and decided I wanted something cold. I decided on my Top Ten Christmas Books I am anticipating. I plan on doing a Christmas marathon in September and October, so I may as well start planning my TBR now. 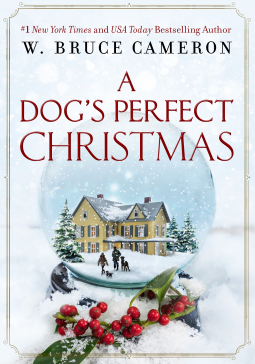 The problems fracturing the Goss family as Christmas approaches are hardly unique, though perhaps they are handling them a little differently than most people might. But then a true emergency arises, one with the potential to not only ruin Christmas, but everything holding the family together. Is the arrival of a lost puppy yet another in the string of calamities facing them, or could the little canine be just what they all need? 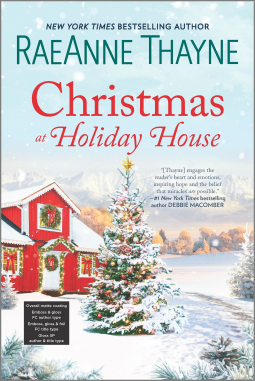 A widowed young mother’s search for the perfect Christmas for her little boy leads her to Silver Bells, Colorado. Abby Powell becomes enamored with the heartwarming small-town community—with snow!—but not so much with her new client’s less-than-jolly son, Ethan Lancaster. Ethan, a single-minded businessman, has learned the hard way that love and family are not for him. But he never counted on the lovely newcomer to town—or the emotional pull she and her son, Christopher, would have over him. As Ethan and Abby work together to restore Holiday House, the Lancaster’s historic family mansion, in time for Christmas, Ethan’s heart begins to open along with his home. 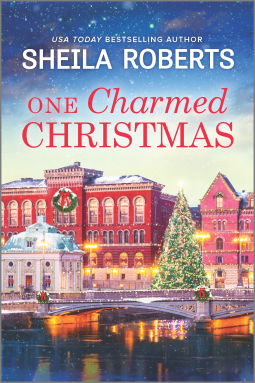 Catherine Pine is hoping her Christmas is a bit more jolly than last year’s. That one was her first without her husband, and with her kids and their families absent this year and potential health issues on the horizon, she’s worried. But things change when her good friend invites her on a Christmas cruise to lift her spirits. Suddenly every day is an adventure and she’s making a bunch of new friends, including the lovable Sophie Miles. It’s like a gift from Santa when Sophie and Catherine meet the charming Dr. Rudy Nichols, a perfect match for hypochondriac Sophie. But he comes with a two-legged lump of coal, his guard-dog daughter, who’s determined to protect him from potential gold diggers. And then there’s chocolatier Trevor March, who’s also interested in the scrumptious Sophie. Can he convince her that chocolate is the perfect cure for her every imagined illness? Who knows what Santa has in store for these holiday travelers? Anything could happen this charmed Christmas! 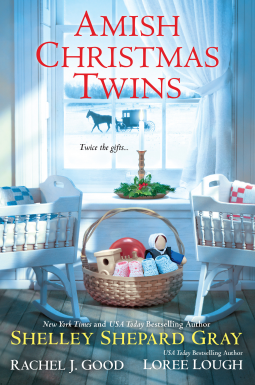 In these heartwarming, faith-affirming stories, three Amish families face the joys, and challenges, of the holidays—with fruitful results . . .
THE CHRISTMAS NOT-WISH by Shelley Shepard Gray
When the foster parents they’ve cautiously grown to love discover they’re expecting, orphaned Roy and Jemima Fisher, ages six and seven, are secretly devastated by the certainty they’ll be given up. With Christmas around the corner, their only wish is for new foster parents as nice as Mr. and Mrs. Kurtz. Meanwhile, the Kurtzes have wishes of their own—and with faith, they all may be gifted with twice the blessings . . .
NEW BEGINNINGS by Rachel J. Good
Still grieving the loss of her husband and unborn baby in an accident several months ago, Elizabeth Yoder is oblivious to her neighbor Luke Bontrager’s deepening affection for her. But while she bleakly faces Christmas alone, it’s Luke who reminds her it’s the season for giving. And when Elizabeth donates her handmade baby clothes to New Beginnings, a home for teen moms, she soon finds her gifts repaid beyond measure, with Luke’s love—and new beginnings of their own . . .
TWINS TIMES TWO by Loree Lough
What happens when two secretive, stubborn people find themselves thrown together to help four rascally youngsters—twins times two!—create a Christmas surprise for their parents? Mischief and mayhem, and just maybe . . . love! 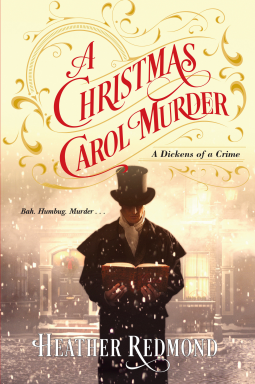 The latest novel from Heather Redmond’s acclaimed mystery series finds young Charles Dickens suspecting a miser of pushing his partner out a window, but his fiancée Kate Hogarth takes a more charitable view of the old man’s innocence . . .
London, December 1835: Charles and Kate are out with friends and family for a chilly night of caroling and good cheer. But their blood truly runs cold when their singing is interrupted by a body plummeting from an upper window of a house. They soon learn the dead man at their feet, his neck strangely wrapped in chains, is Jacob Harley, the business partner of the resident of the house, an unpleasant codger who owns a counting house, one Emmanuel Screws. Ever the journalist, Charles dedicates himself to discovering who’s behind the diabolical defenestration. But before he can investigate further, Harley’s corpse is stolen. Following that, Charles is visited in his quarters by what appears to be Harley’s ghost—or is it merely Charles’s overwrought imagination? He continues to suspect Emmanuel, the same penurious penny pincher who denied his father a loan years ago, but Kate insists the old man is too weak to heave a body out a window. Their mutual affection and admiration can accommodate a difference of opinion, but matters are complicated by the unexpected arrival of an infant orphan. Charles must find the child a home while solving a murder, to ensure that the next one in chains is the guilty party . . . 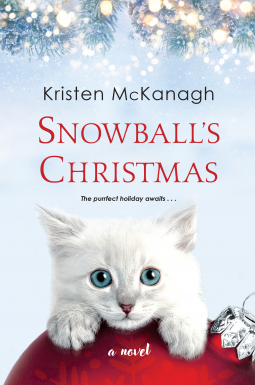 Snowball—an aptly named bundle of feline fluff—is thankful to be spending her first Christmas in the comfort of Weber Haus, the Victorian B&B run by Miss Tilly. Emily Diemer, who cooks for the guests, dotes on Snowball, but she’s not thrilled about another new arrival at the B&B: Miss Tilly’s nephew, Lukas. Which is odd, because Snowball’s animal instincts tell her that Lukas and Emily should definitely be friends.
Everything Emily needs is in this quaint community—including, she hopes, the chance to open her own bakery one day. She doesn’t think much of Lukas for leaving his aging aunt to struggle while he jets around the world taking photographs. But now that he’s here, helping to spruce up the property and getting mixed up in Snowball’s antics, she begins to soften a little. Until she learns what he has planned . . .
Lukas is going to sell Weber Haus so that Miss Tilly can retire. But Snowball is certain that this B&B, and these people, are supposed to be her forever home. Somehow she has to get these stubborn humans to see things through the wisdom of a cat’s eye and a kitten’s loyal, loving heart . . . 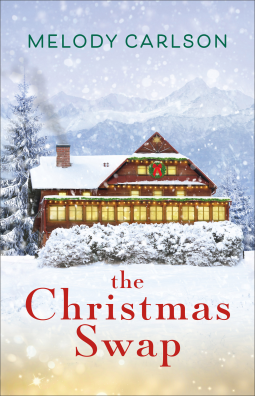 Fan favorite Melody Carlson is back with another delightful Christmas tale to warm your heart on those cold winter evenings.

All Emma Daley wants this holiday season is a white Christmas. But the young teacher and struggling musician sure can’t find that in sunny Arizona. Luckily, there’s someone living in a perfect mountain home in the Colorado Rockies looking to make a vacation trade this year. Tyler Prescott is an in-demand songwriter and talented musician who put his own singing career on hold to write songs for celebrity acts to perform. When his mother convinces him to do a vacation trade for Christmas, he never imagined one of the houseguests would be so sweet–or so strikingly pretty. Naturally, he decides to stick around, and, to get better acquainted, he poses as the house’s caretaker. But when Emma’s friend Gillian discovers his true identity and sets her sights on him, things get . . . messy. 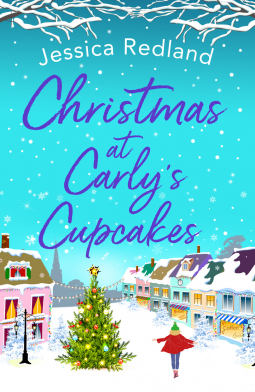 A heartwarming, short festive story of friendship and family from bestseller Jessica Redland.

It’s the most wonderful time of the year…
It’s December on Castle Street; the fairy lights are twinkling, snow has settled and the festive season is in full swing.
For Carly, the owner of Carly’s Cupcakes, it’s the busiest time of year getting everyone’s Christmas treats ready on time. However with her clumsy sister, Bethany, as a co-worker, it’s proving a difficult task. They say you shouldn’t mix work with family. Maybe they have a point…
As Christmas approaches, Carly is also eagerly awaiting the return of her best friend to Whitborough Bay. Liam has no idea he’s been the object of her affection since their schooldays. After years of pining after him, can Carly pluck up the courage to finally tell him how she really feels by 25th December? Could a little festive magic make all of Carly’s wishes come true this Christmas…? 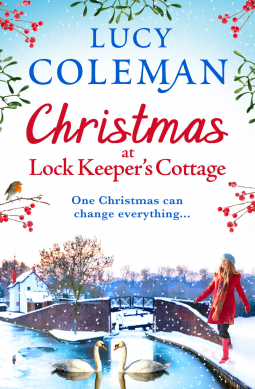 Join us for Christmas in the Cotswolds in this perfect festive escape, from the bestselling Lucy Coleman.

Imogen Tolliman never knew her mother. And when an accident robs Immi of her father too, she goes to live with her grandfather, Tollie, in his picturesque lock-keeper’s cottage by the Aysbury marina. Tollie is the star of the Santa Ahoy Special each Christmas – a festive boat ride along the canal that enthralls both children and adults alike. And as Immi grows up, she starts to appreciate the magical community she is lucky enough to live in.  When Immi meets Gray Adams, she instantly realises he’s someone special. And as their relationship gets serious, they start to plan for the Christmas to beat all Christmases.  But as the day approaches, and the romantic snow showers turn into blizzards, their dream of a Christmas to remember, looks set to be one they’ll never forget – for all the wrong reasons. Can they salvage the festivities, or will old secrets that are finally uncovered turn Immi’s life upside down forever? Spend the holidays in Silver Springs, where the greatest gift of all is the love you never expected.
Up-and-coming TV anchor Emery Bliss can’t imagine anything more humiliating than the sex tape her ex revenge-posted online. That is, until it causes her to lose her job on top of her self-esteem. Seeking solace—and anonymity—in Silver Springs, Emery isn’t looking to get involved with another man any time soon. But when she’s thrown back into contact with Dallas Turner, she sees something that his many detractors have missed. Being home for the holidays and his adoptive mother’s wedding isn’t where mountain climber Dallas feels most comfortable. Thanks to his troubled childhood, he’d rather be on a rock face alone than trying to connect with people. Emery, however, makes him want to overcome his past…somehow. Both Emery and Dallas had been planning on a quiet, solitary Christmas, but the sparks between them are lighting a fire strong enough to last—possibly forever.

So, there you have it. The first ten books I will read for my Christmas Readathon taking place in September and October. I plan on reading Christmas, every other book during these two months.

Do you enjoy reading Christmas Books? Are any of these books on your upcoming holiday TBR?