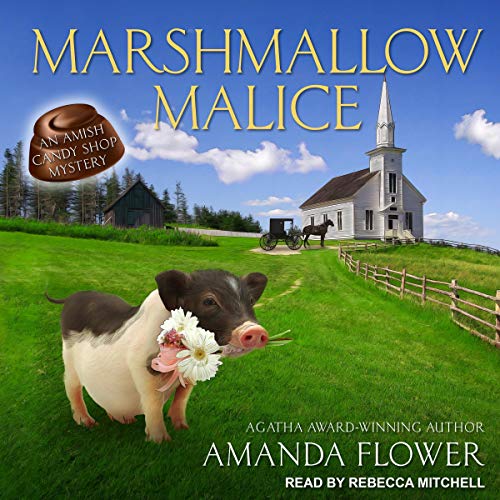 This is the fifth book in Amanda Flower’s An Amish Candy Shop Mystery series and this is another winner. I really enjoy this series with its wonderful characters, a small town setting as well as a local Amish community, and always delicious foods. In this outing, Juliet Brody and Reverend Brook are finally getting married. With most of the town attending the wedding, Bailey the maid of honour in her cupcake dress and Jethro the pig as the ring bearer, a wedding crasher calls the reverend a traitor and tries to stop the wedding. When she ends up dead, left on the steps of the church the next morning, he becomes one of the main suspects.

This is one of my favourite cozy mystery series. Marshmallow Malice has a very well-developed plot with great writing. Of course there is always some humour involved and in this story it is all caused by Jethro the pig. I really like Bailey as the protagonist, she is loving, independent, smart, loyal and hardworking. She works well with her boyfriend Aiden, a town police officer. She also acts as liaison between the police and the Amish community due to her grandmother being Amish. There is some spirituality in the book with Amish beliefs mentioned a few times, but that is it. The mystery is complicated enough to have several suspects and a few red herrings to keep this reader guessing. I was not sure who the culprit was until just before the final takedown scene, which was quite tense. A great addition to the Amish Candy Shop Series.

I listened to the audiobook narrated by Rebecca Mitchell. This is the first book I’ve listened to narrated by her and I enjoyed her performance. She has an easy voice to listen to and I felt she did a good job with this story, using expression, inflection and tone to bring the reader into the story. Her voices for the characters were not all that much differentiated, but I was able to determine who was speaking in most situations due to intonation. I will continue to listen to books that she narrates. The publisher generously provided me with a copy of this book upon request. The rating, ideas and opinions shared are my own. 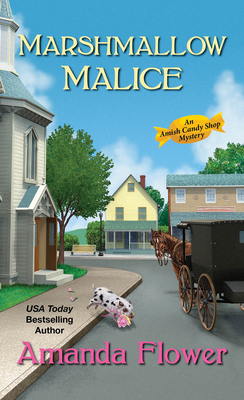 About the Book (From Goodreads): Caught in a sticky situation . . .

With Juliet Brody and Reverend Brook tying the knot in Ohio’s Amish Country’s most anticipated nuptials of the year, Bailey King is determined to do everything in her power to make the event a sweet success. Except midsummer heat waves and outdoor ceremonies don’t mix, and an exasperated Bailey soon finds herself struggling to fulfill bridesmaid duties and keep her stunning marshmallow-frosted wedding cake from becoming a gooey disaster. Then much to everyone’s shock, the entire ceremony crumbles when a guest drops dead, and the cause isn’t sunstroke . . .

Turns out, the uninvited victim came equipped with lots of dirt on the devout reverend’s hidden past. As Reverend Brook tops the murder suspect list on what should have been the happiest day of his life, Bailey and her sheriff’s deputy boyfriend vow to clear his name. Can the duo boil down a series of baffling clues before Juliet considers her marriage a bad mistake–or the killer whips up another deadly surprise?
Recipe Included!

Devour every page and be hungry for more!