Major Misconduct: The Human Cost of Fighting in Hockey by Jeremy Allingham

First, I want to thank Christopher from Plucked From the Stacks, for bringing this book to my attention. You can read his review as well, he is much more eloquent than I am as this is an emotional issue for me.

I have been a hockey fan since a young girl watched Hockey Night in Canada every Saturday Night. My husband played, both my children played, I had season’s tickets to our local OHL team and tried to get to games whenever the Toronto Maple Leafs were playing a team where we could afford the tickets. Yes, I am a huge hockey fan. I can remember cheering for the big hits, the fights and the scrums, until my son started playing. He was a big kid, taller and heavier than all the other kids his age. When he was called up to play on the travel team when only 13, we were thrilled, until I realized why. They wanted an enforcer, but he was only 13 years old. The first fight, all the other parents were cheering and encouraging him, I was screaming, “Skate away, skate away” as other parents were saying, “Calm down mom, its part of the game.” Well that changed my tune in a hurry. I share this story because it sums up what a lot of this book is about.

Jeremy Allingham does a good job researching and interviewing three retired NHL enforcers who have all suffered some level of brain injury. The chapters detailing what these men had gone through after they retired is heartbreaking. Each is dealing with their health and possible CTE in different ways, some more successful than others. He is respectful of what they are dealing with and knows that they have to tell their stories in their own way. He also touches on the number of suicides of the guys who made their living fighting in hockey. Bob Probert grew up and lived in my hometown and I know how much he suffered as a pugilist in the game. We have fundraising motorcycle rides every year to raise money for brain injury research. Over and over he states that if two men started bare knuckle brawling anywhere else, they would be arrested, but it is “part of the game” in hockey. The sad thing is that unless the fans stop cheering and expecting fighting to be part of the game, the owners, who want to make money, will not take it out. Children watching these games get a mixed message about fighting. Near the end of the book is the following paragraph:

The incessant violence came with a strong and troubling juxtaposition, too. As the referees continued to parade players to the penalty box, the jumbotron showed images of young children in the crowd. Although they were dancing to the music during the breaks in play, only moments before, they had witnessed, internalized, and normalized the sight of multiple grown adult men dropping their gloves to the ice and punching each other in the face. It was upsetting to consider that these hundreds of kids would go home, fall asleep, and wake up the next day for school with the idea that fighting like that is no big deal. That the only accountability for that kind of fighting is to sit in the box for five minutes, and then you’re back doing what you love to do best.

I am a hockey fan! A huge hockey fan. I will continue to watch hockey and go to games, but I do not stand up and cheer during a fight, I do not condone fighting in hockey. I enjoy Olympic hockey where fighting is not allowed, and the stands are full, so the argument that no one will come to the game if fighting is not allowed, is a cop out. It is human lust for blood, plain and simple. I recommend that people who are hockey fans read this book. If you think fighting belongs in the game, this just might change your mind. 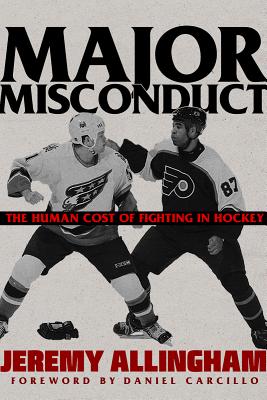 Synopsis from Goodreads: Every night in hockey arenas across Canada and the United States, modern-day gladiators drop their gloves and exchange bare-fisted blows to the bloodthirsty roars of the paying public. Tens of millions of people a year, including children, watch and cheer on the fighters. Some players are paid handsomely; others barely a living wage. But either way, these fighters are lauded, valued, and considered to be essential to the game. That is, until their playing days are over. Hockey enforcers spend their lives fighting on ice to protect their teammates and entertain their fans, but when their playing days are over, who’s left to fight for them?

Major Misconduct scrutinizes a highly dangerous and controversial cultural practice. The book dives deep into the lives of three former hockey fighters who, years after their playing days ended, are still struggling with the pain and suffering that comes from bare-knuckle boxing on ice. All of these men believe they may be living with the degenerative brain disease chronic traumatic encephalopathy. They may have had their shot at pro hockey glory, but none of them is rich or famous, and the game has left them with injuries and trauma. They have experienced estrangement, mental health issues, addiction, and brushes with the law. And they’ve stared death in the face.

The debate surrounding fighting in hockey is hotly contested on both sides. This daring and revelatory book explores the lives of those who bare-knuckle boxed on ice for a living and investigates the human cost we’re willing to tolerate in the name of hockey fighting.

5 thoughts on “Major Misconduct: The Human Cost of Fighting in Hockey by Jeremy Allingham”