I am always on the lookout for good non-fiction for children. My grandson loves non-fiction books because he likes to learn things, (his words, not mine). Although I have not read these books to him yet, I do plan on getting many of this series for him for his upcoming birthday. All but two of these books come from the Little People, Big Dreams series. The publisher generously provided me with a copy of this book upon request. The rating, ideas and opinions shared are my own. 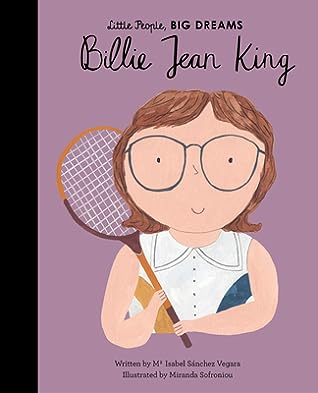 New in the Little People, Big Dreams series, discover the amazing life of Billie Jean King. As anyone who reads my reviews knows, I love this series and look forward to each new book as they are published. This is the story about the amazing tennis player Billie Jean King. Billie Jean was not raised in a wealthy family as most of the tennis players of the day were. Yet, in this book, we see her working hard to achieve her goals to be the best tennis player she could be. She wore shorts instead of skirts, had to work and save her own money to buy equipment and worked hard to prove she was good and deserved to be on the courts. I remember a lot about her tennis career, but this was a great way to learn a bit about her young life. She did a lot for women in sports and equality. The illustrations were once again a delight and fit in nicely with the content of the book. Loving this series as I do, I was happy to see Billie Jean King included in the Little People, Big Dreams series. I believe she’s a great example for children. 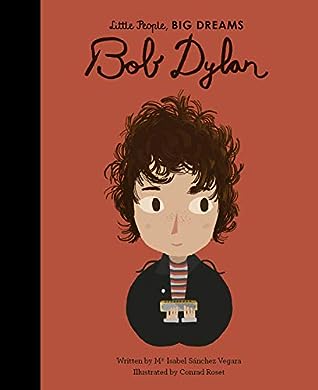 New in the Little People, Big Dreams series, discover the incredible life of Bob Dylan. As anyone who reads my reviews knows, I love this series and gobble up each new book as they are published. Bob Dylan was born Robert Zimmerman. As a child, he loved music above all else. He was not always appreciated for his voice as a child. As he got older he began to compose his own songs under his new name, Bob Dylan. His songs were about real things, events, civil rights and war. He was well received with his new folk music. Many other famous artists recorded his music and it got the audience it deserved. Bob did not mind others singing and recording his songs. His writing was so poetic that he was the first musician ever to win the Nobel Prize for Literature. I love the timelines that appear at the end of each of these books. There are also other resources that can be searched out for further study. This book could be used to teach young children how to write a biography, show that it is important to have a dream and strive to achieve it as well as to introduce one of the greatest authors of our time to a new generation. A good book for a school, class, or public library. 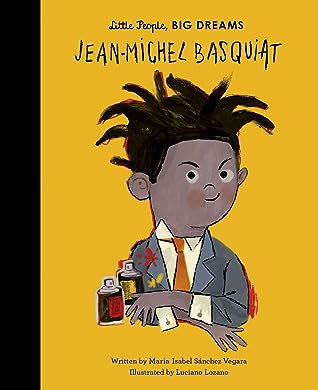 I love the Little People, Big Dreams series and eagerly dove in to read about Jean-Michel Basquiat. This was a person I had not heard of and was quite interested in his life and role in the art world. Basquiat was instrumental in the graffiti art movement, eventually becoming friends with the infamous, Andy Warhol. The illustrations were amazing in this book, giving it an artsy feel as well as blending well with the text. I enjoyed learning about Jean-Michel Basquiat, yet after reading this book, I felt that I still did not know much. I went online to find out more and was surprised to read about his troubled life and death. I can see why this short biography did not include those details as it is written for young children, but it felt a bit sanitized. I would definitely recommend older children find out more about this artist and recommend this book as a starting point to find out if this subject is one that interests a young reader to do further research. The inclusion of a short timeline at the back of these books is also something I really like. As always, I recommend this book to public and school libraries. 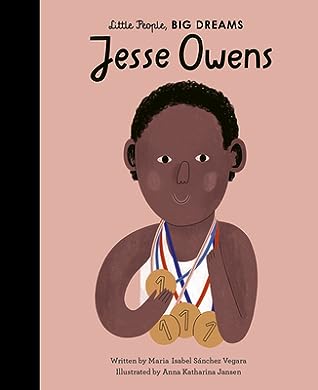 I love the Little People, Big Dreams series. It features ordinary children, accomplishing extraordinary things. These short, non-fiction books include a short story of how these amazing people began life and pursued their dreams. There is a short biography, photographs and timeline at the end of the book to add to what the reader learns in the story. This addition to the series is one of my favourites. We meet a young Jesse Owens, aka J.C. He was fast, even as a young boy, but had too much to do helping his family and working to join a team. When he went to University, he still had to work in order to remain, but was part of the track team. He even became captain of the team, which was a bit hypocritical, as he was subject to racism and segregation. He had to sit and wait until the white members of the team showered before he was allowed to do the same. His achievements, specifically at the 1936 Olympics in Berlin, are legendary, but again, he was not recognized in his own country until segregation ended. I loved reading about this hero, both in sports and human rights, and his gentle way of dealing with the life he was dealt. As always, the illustrations were quirky, yet fit the story perfectly. This is a wonderful starting point to learn more about this great man, as well as to research and learn about racism and segregation in the US. I definitely recommend this to libraries (public, school, classroom, family). 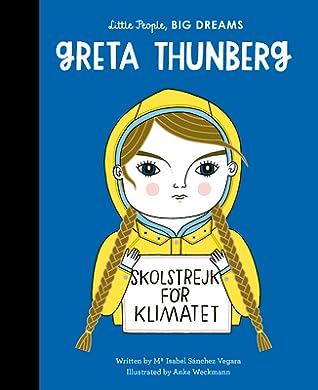 I can’t say it enough, I love the Little People, Big Dreams series. This is one of my favourites in this series for a couple of reasons. I love that this is timely and is taking place now. Also that this young girl has autism, showing that anyone can do great things. There is a brief description of Greta’s family and home-life, but most of the book deals with her reaction to climate change and what she does about it. I am angered at the way she has been treated and demeaned by a certain head of a country, but that is not in this book. It is a very simple telling of what she is doing and how other children have joined in to try and help our world now and for the future. I love the quirky, yet attractive illustrations in this book, they make it fun to look at, while sharing an important message, ordinary children, doing extraordinary things. These short, non-fiction books include a short story of how these amazing people began life and pursued their dreams. There is a short biography, photographs and timeline at the end of the book to add to what the reader learns in the story. As always, I recommend this series to libraries, both public and school. 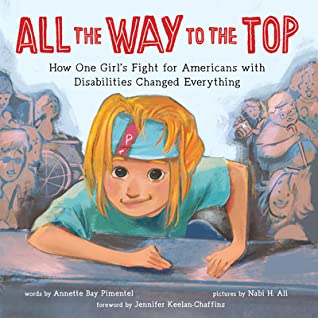 All the Way to the Top: How One Girl’s Fight for Americans with Disabilities Changed Everything by Annette Bay Pimentel, Jennifer Keelan-Chaffins (Foreword), Nabigal-Nayagam Haider Ali (Illustrations)

Jennifer Keelan-Chaffins was only six when she joined the movement to fight for her rights as someone with disabilities. She had cerebral palsy and used a wheelchair. She was unable to do a lot of things like take herself to school because she could not get down the curb. She protests throughout North America to make things accessible for all. I was not familiar with “The Capital Crawl” where many people with disabilities/in wheelchairs crawled up the steps to the Capital building in Washington DC, to demand disability rights. Because of Jennifer and others who joined her, they shed a light on how bad things really were and the American with Disabilities Act was finally passed. We forget, or perhaps don’t realize, that the American with Disabilities Act has only been around since the 1990s, and that before then, there were no requirements to make buildings accessible to those with disabilities. This is a great nonfiction book to show that anyone, no matter how old, can make a difference if you put your mind to it. The back of the book has more information for older readers and actual photographs of Jennifer during the capital crawl. A book that should be in all libraries; school, classroom and family. 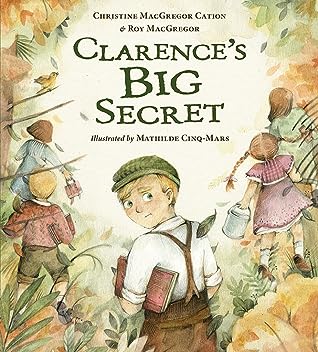 This is another story about an everyday hero that I loved. This hero did not do anything that most people will think extraordinary, but as a retired teacher, I certainly think it was. Clarence was illiterate. He had a very successful life, married, had a family and grandchildren, but he depended on his wife to do so many things for him. When she passed away at the age of 85, 93 year old Clarence did not know what he would do. Even his children did not know he couldn’t read. He tried to teach himself, but when one of his children, Doris, saw him doing this and asked what he was doing, he finally told her. His daughter was a teacher, so she taught her father to read. At the age of 100, he returned to school for the first time since he was only six and read aloud to children. So, why do I think he is a hero? Being able to live today in Canada and not be able to read and write is difficult, but he was successful with the help of his wife. To take the step to learn to read and write when he was well into his 90s, Wow, that makes him a hero in my eyes. You are never to old to learn. I definitely recommend this book to everyone. First, it will show how much damage you can do to someone by laughing at them or making inconsiderate comments. Next we can see that keeping this secret can cause you to make decisions that might not be in your best interests and finally that it is never too late to learn something