The Perfect Stranger by Megan Miranda

The Perfect Stranger by Megan Miranda

I enjoyed “All the Missing Girls” by Megan Miranda, so wanted to catch up on her other books before her new one comes out. I grabbed this one and was ready to settle down with another twisty suspenseful story. Well, I did enjoy this book, but it left me wanting somewhat. This is the story of Leah Stevens and Emmy Grey. Leah runs into an old friend, Emmy at the perfect time. She needs to get out of Boston after losing her job as a journalist and having a restraining order taken out against her. Emmy wants to get away from a toxic relationship. It’s the answer for both of them, so they move to rural Pennsylvania, to start over. Leah starts her job as a teacher and Emmy seems to work a few odd jobs here and there. Then, things start happening. A woman is beaten and left to die. Leah is being stalked and Emmy has disappeared. What is going on and how is Leah involved in it all.

I was definitely interested in this story. I wanted to know who Emmy really was and what she was trying to set Leah up for. Being a retired teacher, I was also interested in how the students fit into all of it. There seemed to be something sinister going on with some of the students that would have had me looking over my shoulders. As Leah uncovered more and more clues and pieces, the feeling of dread built up and the tension ratcheted up. What gave me pause, was some of the decisions and choices Leah made. She seemed to be a bit reckless at times and I wanted to reach out and slap her a few times, especially when it came to her budding relationship with Detective Kyle Donovan. Megan Miranda presents a story with plenty of twists. Just when I thought I had figured it all out, she sent me off in another direction.The author has an easy flow to her writing style as the plot was what I would have expected for a suspense story. I found myself wanting to read just one more chapter. The main reason, I only rated this one four stars was the main character. As I stated earlier, there were times I really questioned what she was doing and wanted her to step back a bit. She was definitely a flawed character, but it was also hard to like her, even though I really wanted to. Overall, I recommend this story as I did enjoy it, but if you have read “All The Missing Girls” this one doesn’t quite measure up. 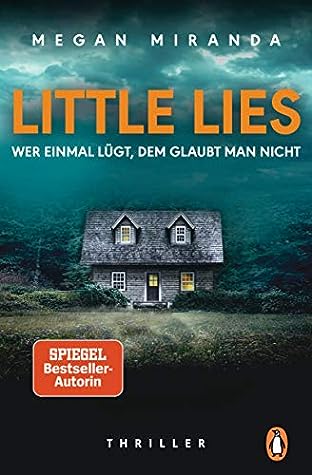 About the Book: Confronted by a restraining order and the threat of a lawsuit, failed journalist Leah Stevens needs to get out of Boston when she runs into an old friend, Emmy Grey, who has just left a troubled relationship. Emmy proposes they move to rural Pennsylvania, where Leah can get a teaching position and both women can start again. But their new start is threatened when a woman with an eerie resemblance to Leah is assaulted by the lake, and Emmy disappears days later.

Determined to find Emmy, Leah cooperates with Kyle Donovan, a handsome young police officer on the case. As they investigate her friend’s life for clues, Leah begins to wonder: did she ever really know Emmy at all? With no friends, family, or a digital footprint, the police begin to suspect that there is no Emmy Grey. Soon Leah’s credibility is at stake, and she is forced to revisit her past: the article that ruined her career. To save herself, Leah must uncover the truth about Emmy Grey—and along the way, confront her old demons, find out who she can really trust, and clear her own name.

Everyone in this rural Pennsylvanian town has something to hide—including Leah herself. How do you uncover the truth when you are busy hiding your own?

9 thoughts on “The Perfect Stranger by Megan Miranda”