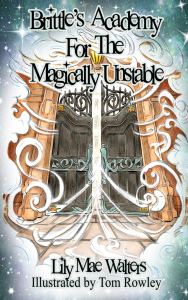 About the Book: It’s Charlie’s first day at high school, his blazer is too big and his shoes are too small, but that’s the least of his worries. He’s been missed off the class lists and is now enrolled in a new school called Brittle’s Academy with a magical and mysterious head teacher. But to stay at Brittle’s Charlie must pass one of the tests…otherwise he’ll be sent to Oblivion!

With shades of Harry Potter, this is a magical read for younger readers (early junior, late primary). It is the first day of 7th grade and Charlie is worried about moving to a new school. His blazer is too big, his shoes are tight and he is worried about all the new kids. What awaits him is beyond his expectations. He is whisked off to Brittle’s Academy, a magical school that is in the clouds.

This is the first book in what I hope will be a series. This story introduces us to the main characters, the teachers and the houses that the students will be in. They don’t live at the school and they only attend once a week, so I am sure there will be some adventures having to do with the NUMs (no understanding of magic) and SUMs (some understanding of magic) as well. There are some great descriptions of characters and places in the story. It is well paced, with short chapters making this a relatively quick read. There is some mystery and suspense as Charlie and his friends learn more about this school, specifically when they have to perform tests to determine what house they will be in. This is a fun read, with interesting characters, humour and of course, magic. I am looking forward to sharing this book and future offerings in this series with my grandson. I was gifted a copy of this book upon request. The rating, ideas and opinions shared are my own.

About the Author: Lily Mae Walters chose her pen name in honour of her beloved grandparents who also star in the Josie James series.

She is married with two teenage children, and two huskies that are the inspiration behind Murphy and Asher in the books. Lily Mae lives in Nuneaton, England and finds herself using local  places and even her old school in her stories. Family and friends mean the world to Lily Mae and many will find themselves popping up throughout the series.

Lily Mae also writes for adults under the name of Florence Keeling.