Sunrise on Half Moon Bay by Robyn Carr @RCarrWriter @HarlequinBooks 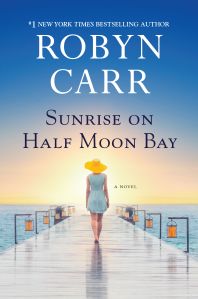 Sunrise on Half Moon Bay by Robyn Carr

This book was so much more than I expected. Adele (Addie) and Justine are sisters, but because they are 20 years apart, don’t really have much of a relationship. Justine is busy living her life with her family and working to support them all. Addie lives in the family home about 40 minutes away, not sure what is next for her. She has spent the last 8 years of her life as a caregiver, first assisting her mother take care of her dad, then her mother after suffering a stroke shortly after her father’s death. Both of these women have some serious decisions to make, but both have a chance at new beginnings.

Both Addie and Justine were strong women, although neither was sure of that when this story begins. I really liked them both but for different reasons. Addie was a person who evoked sympathy from me. She had given up on her dreams to take care of her parents and when she was finally free to move on with her life after their deaths, she didn’t know what to so with herself. She was depressed and possibly about to have the rug pulled out from under her by Justine. Justine was a mother, wife and breadwinner in the family. She had spent most of her life doing what was expected in order to give her family pretty much everything they wanted. I felt bad for her, almost like they were all using her for what she could give them, so when her life started falling apart, I was rooting for her to stand up for herself and not feel like everything was her fault. The secondary characters all played very important roles in making the sisters become the best they could be. I really enjoyed this story. It is a story of finding yourself. What do you really want out of life? A story of family, getting to know them and helping them become the best they can be. It is a story of second chances and new beginnings. It is also a story that deals with infidelity, abuse, betrayal and eventually forgiveness. The last paragraph in the synopsis really summed up my thoughts about this book. “Neither woman knows how to start life over but both realize they can and must support each other the way only sisters can. Together they find the strength to accept their failures and overcome their challenges. Happiness is within reach, if only they have the courage to fight for it.”

The publisher generously provided me with a copy of this book upon request. The rating, ideas and opinions shared are my own.

Book Summary: Sometimes the happiness we’re looking for has been there all along…

Adele and Justine have never been close. Born twenty years apart, Justine was already an adult when Addie was born. The sisters love each other but they don’t really know each other.

When Addie dropped out of university to care for their ailing parents, Justine, a successful lawyer, covered the expenses. It was the best arrangement at the time but now that their parents are gone, the future has changed dramatically for both women.

Addie had great plans for her life but has been worn down by the pressures of being a caregiver and doesn’t know how to live for herself. And Justine’s success has come at a price. Her marriage is falling apart despite her best efforts.

Neither woman knows how to start life over but both realize they can and must support each other the way only sisters can. Together they find the strength to accept their failures and overcome their challenges. Happiness is within reach, if only they have the courage to fight for it.

Set in the stunning coastal town of Half Moon Bay, California, Robyn Carr’s new novel examines the joys of sisterhood and the importance of embracing change. 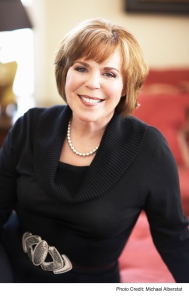 About the Author: Robyn Carr was a young mother of two in the mid-1970s when she started writing fiction, an Air Force wife, educated as a nurse, whose husband’s frequent assignment changes made it difficult for her to work in her profession. Originally from Minnesota, they lived in all four corners of Texas, Alabama, Florida, California, Utah, Arizona and Nevada. Little did the aspiring novelist know then, as she wrote with babies on her lap, that she would become one of the world’s most popular authors of romance and women’s fiction, that 11 of her novels would earn the #1 berth on the New York Times bestselling books list.