Before She Knew Him: A Novel by Peter Swanson, Narrated by Sophie Amoss & Graham Halstead 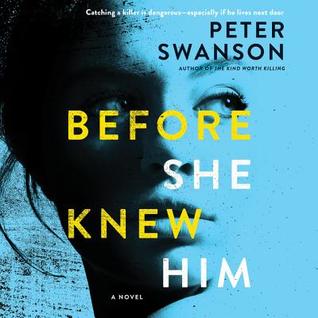 Before She Knew Him: A Novel by Peter Swanson, Narrated by Sophie Amoss & Graham Halstead

This is a book I waited too long to read. What would you do if you found out that you new neighbour is a murderer? Hen, short for Henrietta, figures out shortly after meeting her new neighbour that he killed a man. Does she tell the police? Is she sure?

Hen notices a trophy on the neighbour’s mantle and she is sure that it is an item taken from a murder scene that she had been researching. No one believes her so she begins to follow him and has no idea what is about to happen next. Matthew, her neighbour, thinks he is an avenger for women who have been wronged and doesn’t really think he is doing anything wrong. Will he get caught? Will Hen turn him in?

I am not going to say anything else about the story or the characters because I do not want to give this story away. Peter Swanson has written some wonderful thrillers and this one is right up there with his best. That ending…. oh my. He totally took me by surprise and had my jaw dropping. I was not expecting those final twists at all. This was another well-written thriller that hooked me right from the beginning. I listened to it one day because I could not stop. I had to find out what was going to happen and when I did, WOW. I definitely recommend this book to anyone who enjoys a well written, twisty thriller.

I listened to the audiobook narrated by Graham Halstead and Sophie Amoss. Ms. Amoss is a new narrator for me and I enjoyed her performance of this story. Both of these narrators used expression, inflection, pacing and voicing to present a wonderful experience listening to this book. I always enjoy books with multiple narrators more than if it is one trying to do both male and female voices. I definitely recommend the audiobook to those who enjoy listening to them. 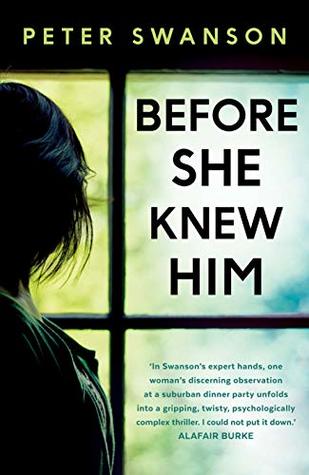 About the Book: Hen and her husband Lloyd have settled into a quiet life in a new house outside of Boston, Massachusetts. Hen (short for Henrietta) is an illustrator and works out of a studio nearby, and has found the right meds to control her bipolar disorder. Finally, she’s found some stability and peace.

But when they meet the neighbors next door, that calm begins to erode as she spots a familiar object displayed on the husband’s office shelf. The sports trophy looks exactly like one that went missing from the home of a young man who was killed two years ago. Hen knows because she’s long had a fascination with this unsolved murder—an obsession she doesn’t talk about anymore, but can’t fully shake either…

4 thoughts on “Before She Knew Him: A Novel by Peter Swanson, Narrated by Sophie Amoss & Graham Halstead”