Malibu Burning: The Real Story Behind LA’s Most Devastating Wildfire by Robert Kerbeck 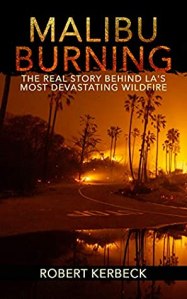 Malibu Burning: The Real Story Behind LA’s Most Devastating Wildfire by Robert Kerbeck

This is the story of the Woolsey Fire of 2018 in Malibu California. The story is written by a resident of the Malibu who experienced the fires first hand. He originally wrote and Op. Ed. piece for the local paper, but was convinced that he should tell the story of the fire from the viewpoint of residents and those who took a stand to fight the fires when firefighters did not show up, or sat on the side of the road, content with evacuating residents. You hear from those who saved their own and their neighbour’s homes. People who were involved in keeping ver 600 students on Pepperdine College Grounds safe as the fire raged around them. There are stories from residents who had trained to be Call FireFighters and raised money for their own engine, that was then commandeered and not available to save their own homes and many more. I was shocked to read about the poisons and possible radiation that was released in this fire.

This book takes you into the hearts and minds of those who fought for their lives while the world watched Malibu Burning. It reminds me of the last non-fiction story I read, The Last Plane in the Sky also told in stories from people who were there. The book is written in an easy to read manner and was a quick and interesting read. I read it in one day as I was very quickly invested in the various stories. It is well written and worth a read if you are interested in fire fighting, Hollywood, climate-related disasters or just an informative and interesting non-fiction story. I recommend this book to anyone with any of the aforementioned interests. The publisher generously provided me with a copy of this book upon request. The rating, ideas and opinions shared are my own.

About the Book, From Goodreads:  Malibu is known as an earthly paradise of multi-million-dollar mansions, movie stars and unimaginable natural beauty. But all that changed on November 8, 2018.

Go deep behind the scenes of the most destructive wildfire in Los Angeles history. Alongside his wife and son, Robert Kerbeck battled the fire that threatened to take their home. He knows first-hand how the Malibu fires affected everyone – from the rich and famous to the firefighters who often risked their lives.

You’ll also read:
How the massive blaze affected Julia Roberts, Bob Dylan, Nick Nolte, and other celebrities.
Hundreds of interviews with perspectives of locals ranging from the Deputy Fire Chief and Malibu City Council members to residents who fought to defend their homes.
How people survived this tragedy through courage, kindness and unified cooperation.
This book takes you into the hearts and minds of those who fought for their lives while the world watched Malibu Burning.

14 thoughts on “Malibu Burning: The Real Story Behind LA’s Most Devastating Wildfire by Robert Kerbeck”