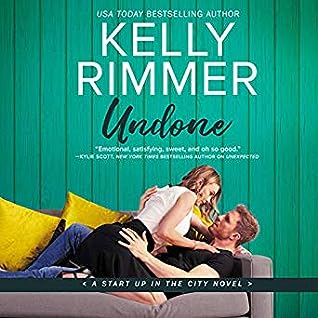 Undone is the third book in the Start Up in the City series, but the only one I have read/listened to. I had no problems following the story, but having said that, I will have spoilers when I go back and read the first two. Jess Cohen is the main character in the story. She is preparing to stand up for her best friend Izzy (Isabel) at her second wedding to one of Jess’s partners Paul. The problem is that Jess has to face Paul’s brother Jake, the man she is still in love with.

This is Jess and Jake’s story. We learn about their previous relationship and what happened between them. Jake is a great character. He is angry at Jess for dumping him, but he still has feelings for her. Jess has a lot of secrets that get in the way of her relationships and until she is finally willing to share them with her friends, who are actually her family, she will not be able to move on. There were times that I got really frustrated with Jess. She made assumptions about people that were not always accurate and she didn’t give them a chance to clarify or correct. I also felt very sorry for her. She had a lot of baggage that affected her decision making. The supporting cast were great. They say that if you have one good friend you are blessed, Jess had several and the support they gave her, especially when she finally shares her secrets was wonderful. The story was told in alternating chapters with both Jake’s and Jess’s POV. It was a great way to see the situation from each of their perspectives. This was a wonderful second chance romance that I enjoyed. I will go back and read Abby’s and Izzy’s stories.

I listened to the audiobook narrated by Lidia Dornet and Rock Engle. I enjoy when there are both male and female narrators and this was especially appreciated with this story being told from both of their points of view. Both of their performances were well done with a good pace, expression and intonation. These are narrators I have not listened to before, and I enjoyed their narration very much. 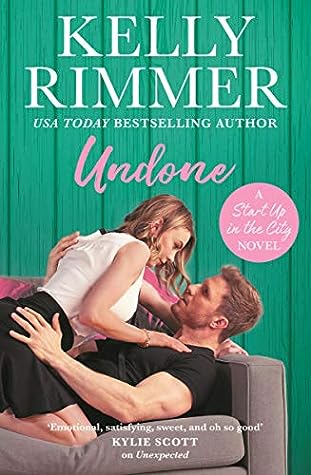 About the Book:  The sizzling and delicious new romance from USA Today bestselling author Kelly Rimmer

Running a major tech company without breaking a sweat? No problem. But being bridesmaid at her best friend’s wedding is giving Jess Cohen a bad case of the jitters. Maybe that’s because she’ll have to face the groom’s brother, Jake – the man she’s been avoiding for the past two years and who she dumped mercilessly, unable to tell him the truth about her past. Jake, who’s loyal, loving and all wrong for Jess – if only her heart could remember that.

Jake Winton spent four months secretly dating Jess, and the past two years trying – and failing – to forget her. Now he’s sure their connection is still there, sizzling and undeniable. Whatever she’s holding back, he can handle – if only she’ll trust him with her secrets, her fears and her heart.

4 thoughts on “Undone (Start Up in the City #3) by Kelly Rimmer, Rock Engle & Lidia Dornet (Narrators)”