This book was one that I could not put down. As another reviewer put it, “it was compulsively readable”. Once I started reading about Sister Evelyn and the residents of Mercy House, I wanted to know what was going to happen to these ladies.

Mercy House is a women’s shelter in Bedford-Stuyvesant neighborhood in Brooklyn, It is run by three aging nuns, Sister Evelyn, Sister Maria and Sister Josephine, each of them bringing something different to the operation of the Home. It is a shelter that accepts abused women, whether physical, mental or emotional victims. All women no matter what religion, race or background they bring with them. They do not always follow Catholic Teaching and Doctrines, which brings them under fire during the “Nunquisition”. Enter Bishop Hawkins, the man sent to investigate Mercy House. He has a past with Evelyn and will not be happy until he shuts Mercy House down.

Sister Evelyn is at the main character in this story. She is a feisty, no-nonsense, wise-cracking, protectress. She has faced down muggers, naysayers, and violent men while protecting her residents. The only man she has not faced down is Bishop Hawkins. He abused her while she was a novitiate and made her feel that she was the one in the wrong as she was the temptress. It is now time for Evelyn to confront this powerful man and determine what she is willing to do to protect the women she cares about. The secondary cast was very strong. The residents, the other nuns, the community members and even her family members all add wonderful colour and detail to the story.

The difficult part for some people to read or listen to will be the sexual and physical abuse that is described both involving the priesthood and that directed at the young female residents. It is a necessary part of the story, but not gratuitous. A good portion of this book revolves around the Catholic Church and the Vatican, specifically abuse of children and young women that is brushed under the rug. This has been widely reported in the newspaper over the last decade, and I am happy to say that it is being dealt with. Like in every profession, there are bad apples, and there are some inthe priesthood. This book is very critical of those men, not Catholicism in general. Overall, Mercy House was a compelling read. I learned about some history around the Catholic church as well as becoming emotionally involved with the lives of the residents of Mercy House. This is a gritty story, that not only puts the catholic church front and centre, but deals with heartbreak, abuse, anger, evil, female unity and strength and forgiveness of self and others. A well-written narrative that I enjoyed immensely.

I did a read/listen of Mercy House, narrated by a full cast. The voices given to the various characters made this an amazing book to listen to. Each of the residents had their own accents and voices so I knew who was speaking and telling their story. Sister Evelyn’s voice was strong and had me picturing her in my mind. If you get an opportunity to listen to this audiobook, I highly recommend it. The publisher generously provided a copy of this book upon request. The rating, ideas and opinions shared are my own. 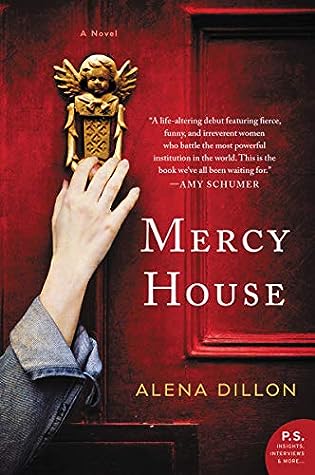 About the Book: A powerful debut novel of a refuge in Brooklyn for women in trouble—and the one woman who will risk all to protect them.

In the Bedford-Stuyvesant neighborhood of Brooklyn stands a century-old row house presided over by renegade, silver-haired Sister Evelyn. Gruff and indomitable on the surface, warm and wry underneath, Evelyn and her fellow sisters makes Mercy House a safe haven for the abused and abandoned.

Women like Lucia, who arrives in the dead of night; Mei-Li, the Chinese and Russian house veteran; Desiree, a loud and proud prostitute; Esther, a Haitian immigrant and aspiring collegiate; and Katrina, knitter of lumpy scarves… all of them know what it’s like to be broken by men.

Little daunts Evelyn, until she receives word that Bishop Robert Hawkins is coming to investigate Mercy House and the nuns, whose secret efforts to help the women in ways forbidden by the Church may be uncovered. But Evelyn has secrets too, dark enough to threaten everything she has built.

Evelyn will do anything to protect Mercy House and the vibrant, diverse women it serves—confront gang members, challenge her beliefs, even face her past. As she fights to defend all that she loves, she discovers the extraordinary power of mercy and the grace it grants, not just to those who receive it, but to those strong enough to bestow it.