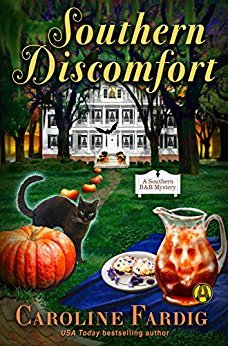 This is the first in a new series by Caroline Fardig, A Southern B&B Mystery. Quinn and Delilah Bellandini run their grandfather’s B&B in Savannah. In this first book, Quinn stumbles upon a local restaurant owner’s dead body, in his restaurant. The dead man’s brother, Drew, is a friend of Quinn’s, and is arrested and charged for the murder. Quinn is also a “person of interest” so she decides to do some amateur sleuthing to find the real killer. There are a lot of suspects, as Jason Green was not well liked. Can Quinn and Delilah find the real murderer?

I enjoyed this cozy mystery. The characters are great. The sisters are smart (most of the time), loyal, caring and hard workers. Their grandpa Sal is in and out of the story, but you know he loves his granddaughters and wants the best for them. Then there is Uncle Frank. He is dead and both Delilah and Grandpa Sal can see and converse with his ghost, Quinn thinks it is a bunch of hokey. Enter Tucker, the boy who grew up across the street from the Bellandinis. He is attracted to Quinn and is working hard to get her to reciprocate his feelings. There are some chuckles as the girls develop their sleuthing skills and Quinn is a bit of a clutz so in between the more serious moments there are still some giggles. I enjoyed the setting of Savannah, with its sultry weather and tourist destination. The mystery was well written and developed and was sleuthing right along with the girls. I figured out the culprit before they did, but if they had, we would have missed the exciting showdown. Overall a fun and interesting mystery and a series I am looking forward to following. My one suggestion would be to have more involvement with the guests at the B&B. If you enjoy a southern mystery, then pick this one up.

About the Book: Southern hospitality meets deadly deception in the start of a charming new mystery series from the USA Today bestselling author of the Java Jive novels.

Quinn Bellandini loves her life in Savannah, Georgia, where she runs her grandfather’s B&B with her sister, Delilah. From baking fresh scones and serving up grits every morning to ensuring the guests see the best of their historic city, Quinn can’t imagine doing anything else—even if it means dealing with nuisances like the occasional malfunctioning commode. But when Quinn drops by the local restaurant owned by her friend Drew Green, and stumbles upon a murder, her whole world comes crashing down.

Drew’s brother was always a little surly, but Quinn can’t imagine that someone disliked the prickly chef enough to kill him. The police, on the other hand, don’t believe that Quinn was simply in the wrong place at the wrong time. Before her guests can even digest the next morning’s gourmet breakfast, Quinn learns that she and Drew are suspects.

Drew thinks they should do some investigating of their own. Quinn is pretty sure she’s better suited to playing hostess than amateur sleuth. But with Delilah as her cynical sidekick, Quinn starts looking for the real killer—before she gets put away faster than you can say “sugar.”