Willow Island Series #3 and #4, Whisper of Bones by Melinda Leigh,

I did a read/listen to this novella and it was a fun way to experience this story. Once again, Tessa finds herself investigating a murder on the small Widow’s Island. When the staged drowning, turns out to be a murder, she has more suspects than she would have expected. The victim was not well liked, but who hated him enough to kill him. With the help of her partner, Logan, they quickly meet with all the suspects and ask questions. They get an inkling of who the culprit is, but will he/she get away before they can get enough evidence and make an arrest. I enjoy this series and the characters involved. Tessa is a smart, intuitive detective and not much gets by her. She is still thinking about the disappearance of her friend 20 years earlier and at the end of this story, there is a clue to that disappearance. A well paced, and written story which was a quick read. I really like how Melinda Leigh and Kendra Elliot have developed this series and characters. The audio of this book was also well done. The narrator, Christine Williams reads with expression and adds some accents and voices to the characters. 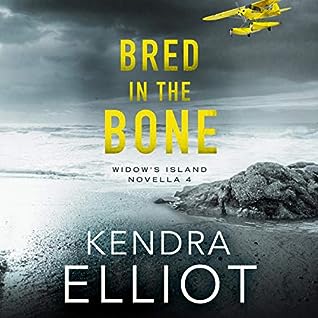 Bred in the Bone (Widow’s Island #4) by Kendra Elliot

In the conclusion to the Widow’s Island series of novellas, we finally find out what happened the Tessa and Cate’s friend, Samantha, 20 years earlier. Cate is helping Tessa with what appears to be an open and shut case of manslaughter. The town drunk was hit and killed while riding his bicycle on the main road. The driver of the car did not stay at the scene. When they find her, she admits to killing the man to save her son’s reputation. It turns out that her son and this man were involved in the accidental death of Samantha 20 years earlier. Tessa and Cate are on the hunt for her son as well as to follow up on a piece of evidence they recovered in the previous book. This was a great conclusion to this series. I liked how the investigations turned out as well as the decisions that Tessa and Cate make with their lives. Another well paced and developed story in this series. I have really enjoyed how these books meshed together and told this great story. Once again, I did a read/listen with this story. Christine Williams once again does a good job with this narration using her voice to add excitement to this story. Well done ladies.

Overall, this was a very enjoyable series. I am in awe of how well, Melinda Leigh and Kendra Elliot mesh their books together. I am looking forward to seeing what they come up with next.

8 thoughts on “Willow Island Series #3 and #4, Whisper of Bones by Melinda Leigh,”