It is with a bit of a heavy heart that I write this review. This will be the last book in the Mainely Needlepoint Mystery due to the death of Lea Wait last year. I enjoyed all the books in this series and this one was no exception. A movie is being shot in Haven Harbor and there are a lot of local residents involved. Angie and Sarah are helping with set design, the movie is based on one of Ruth’s books and she is working on rewrites for the script, and some of the young people are acting or working on the crew. This is a boon to Haven Harbor, until there is an accident on the rocks and the director plunges to his death. It looks like an accident, but when his body is found full of alcohol and pills, it seems someone had planned an accident in his future.

I always enjoy the dual timelines in this series. This one has the original story that inspired Ruth’s book, along with the present day mystery. Angie starts her own investigation when it appears that Leo, a local teen, is being blamed for the accident. Using her excellent skills of questioning and interviewing, she is able to get information that evades the police. There are several suspects, a wife, some disgruntled actresses and others on the crew due to his abrasive and predatory personality. I really enjoy my visits to Haven Harbor. The characters are so likable and authentic with all the same problems and issues as anyone might have. This story grabbed me right from the first page and held it until the end. It wasn’t action packed, but a well developed and well written mystery. I like that Angie has some detecting skills, being a private detective, and is often asked for help by the police, rather than sticking her nose in where it doesn’t belong. Overall, another wonderful addition to the Mainely Needlepoint series.

I listened to the audiobook narrated by Christina Delaine. She is a wonderful narrator. She uses great expression, pacing and inflection to depict the various characters and mood of the story. My one complaint is that with the local characters where she uses an accent, they tend to sound very much the same. Otherwise, her performance was well done. I do recommend not only this book, but the full Mainely Needlepoint series to readers of mystery, whether you enjoy a cozy or not. The publisher generously provided me with a copy of this book upon request. The rating, ideas and opinions shared are my own. 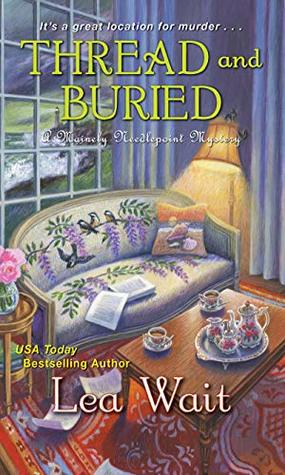 About the Book: Haven Harbor is an authentic coastal Maine town–which makes it the perfect location for a new film production. But now it’s become the scene of a crime . . .

Needlepointers Angie and Sarah are helping with set design for the movie being shot in their little New England hometown–but as the lighthouse and the wharves bustle with activity, a real-life drama is about to unfold. The producer, Hank Stoddard, has been harassing the pretty young female lead, and the two exchanged heated words at a lobster bake. Now someone’s lowered the boom on him . . .

After a wayward piece of sound equipment sends him to his death, theories fly about who went off-script. Meanwhile, a local woman’s tragic story about a true love lost at sea, which originally inspired the film, may lead to murderous revelations from long ago. Angie’s got to unravel these mysteries, and may need to give more than one killer the hook . . .

Lea Wait was an American author of historical novels and mysteries, many set in Maine. She has written historical and contemporary books for children aged 7 and up, two books of nonfiction, and the Shadows Antique Print Mystery series and Mainely Needlepoint series for adults. Born in Boston, Massachusetts, she grew up in a family where books were an important part of life. Her family summered in Maine. Her grandmother was an antiques dealer, and in 1976 she started an antique print business, and decided she should become a writer. As a single parent, she adopted four “older” girls born in Korea, Thailand, Hong Kong and India. In 1998 she left corporate life and moved to live in Edgecomb, Maine.  She married artist Bob Thomas in October 2003.

In Memoriam of Leah Wait  can be read here. You can also visit Remembering Lea Wait on The Wickeds: Wicked Good Mysteries to read their thoughts on their friend.