I got so far behind on my reviews of Children’s Books. I can read them to my grandchildren several at a time, but then have to take the time to write the reviews. Here are the last several that I read to them before Christmas. Once again, I have tried to include their comments and/or reactions. All of these books were received from the publishers via Netgalley. The comments, ideas and opinions contained within are my own. 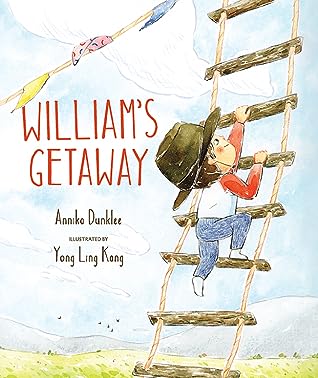 Anyone who is an older sibling will love this book. William and his little brother Edgar often play together, but sometimes he needs time alone. He is able to scurry off to his hot air balloon to be alone as Edgar is afraid to climb up into it. Once William sees how much his brother wants to be with him, he encourages him to leave all his “crutches” behind and climb up to join him. This is a sweet story about brotherly love. I love how William invites Edgar to get over his fear to join him, even though it means he will no longer have his special place to be alone. Having had a younger brother who was often foisted off on my friends and I growing up, I could feel William’s pain. He needed time away from his brother just as I did as a child. When it comes right down to it though, blood and love will win out. The illustrations are delightful and show the emotions well. I read this to my grandson before Christmas when he was sick and he identified with William very much. He often wanted his sister to leave him alone. He loved that William helped his brother get over his fear and that they could play together in the end. A book that I would recommend to families for their personal libraries. 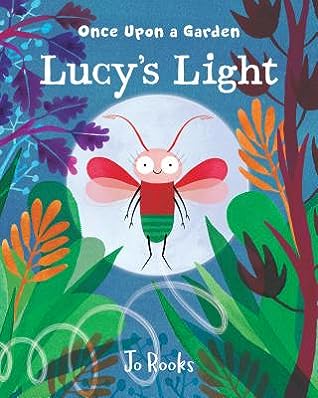 Lucy is a lightning bug that is an amazing flier, but doesn’t light up. She is worried about being accepted by the others. She practices, but to no avail. When there is a problem and Lucy’s friends are in danger, the fact that she doesn’t light up saves the day. A nice story about being yourself, accepting your limitations and using your strengths. The illustrations are cute, but nothing extravagant. When I read this to my grandchildren, they felt bad for Lucy and really wanted her to learn to light up. Even though she saved the day at the end, my grandson still wanted her to light up at the end. We talked about how it is important to use your strengths and help others, but he didn’t seem to think that was the most important thing. A cute story overall but perhaps he was a bit too young to get the total concept.

I am guessing this book was originally written in another language and does not do well in translation. Dr. Mouse has some peculiarities about his practice, treating six patients a day, not beginning to deal with them until all six chairs were occupied and really not having any diagnosis for his patients at all. They actually help each other, somewhat like a support group. Of course, none of the problems were actually medical at all. I tried to read this to my grandson, but he was not interested in the story and actually asked me to read something else. I tried to read it on two separate occasions but he was not interested. He actually said, “No, I don’t like that one grandma.” Sorry, this was a miss for us. Perhaps it might be better geared to older children, but I am not even sure of that. 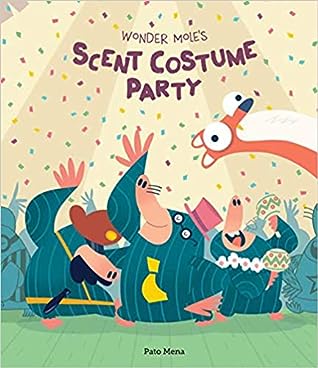 We all know that moles have almost no eyesight and get around by smell, so when Mole has a costume party, not only do the animals dress up as other animals, but they wear the scent of the animal as well. What a perfect time for the weasel to sneak up on the unsuspecting moles. The premise of this story is quite silly. How would moles know what an elephant or rhinoceros looked or smelled like. Of course that it the adult talking, the grandchildren had no problem with this issue at all. In fact, my grandson was yelling at the moles in the story to figure out that the weasel was not a mole in costume and they had better be careful. The illustrations were wonderful. Weasel’s look was quite goofy and the moles were all very silly as well. The ending was an unexpected twist that showed good triumph over evil. This was a cute story that the grandchildren enjoyed. 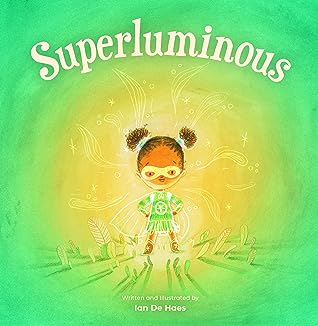 This appears to be a story about a little girl that glows and shines. She is happy with her glow and refers to it as her superpower. When the kids at school start to question her glow and inform her that it is nothing special, she begins to dim until her glow all but disappears. Of course this is a euphemism for any skill, characteristic or individual gift that a person may have that is belittled by others. It takes courage to ignore the comments of others and let yourself shine. I really like this little story. The little girl is beautiful and the illustrations demonstrate this. As she doubts herself, she loses her light and eventually learns to let her light shine and to share it with others, especially her sister. My grandchildren loved this little story. My grandson loved that she shone and was sad when her glow went out. He was very happy that she got it back. I am not sure if got the full message of letting your true personality and self shine, but I think he will eventually. One that I think should be in any school or public library.

5 thoughts on “Mini-Reviews of Children’s Books”