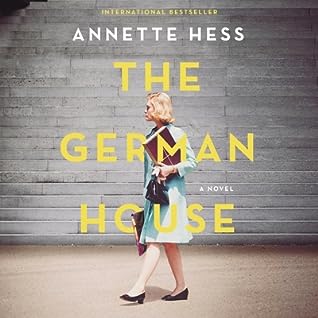 This was a very different book about WWII from what I have read. This story takes place in 1963 during the Frankfurt Auschwitz Trials. Eva Bruhns is a young interpreter. She interprets Polish usually transcribing manuals. She is asked to come to a lawyer’s office one day as they do not have anyone to interpret for a Polish witness. When she hears about the atrocities and the hint that her father and mother may have been there, she will stop at nothing to uncover the truth. What she finds out changes her in ways that she can never return to her former life.

The story doesn’t just focus on the trial of war crimes, but on its affect on Eva and her family. It is a book that makes you think. What would you do if you found out your parents had been lying to you all your life and that they had done something despicable. The trial also has an affect on many people, those who testified, those who witnessed the trial, those who worked the trial and their families and friends. This is a period in history that I had never really thought about. The atrocious war crimes are very well recorded, but not the trials. Are people who are just following orders guilty? Was fear for their own lives and their family’s lives a reason to do what they did? Are those who knew about the atrocities and did nothing to help just as guilty as those who perpetrated the acts? The author, Annette Hess, writes a story that needs to be told. It is heartbreaking at times. This story is written with compassion, honesty and feeling. I definitely recommend it to anyone who reads historical fiction, especially those who read about WWII.

I listened to this story narrated by Nina Franoszek. This book was translated by Elisabeth Lauffer, so there is some stilted areas in the story. Ms. Franoszek gave Eva a voice that was very realistic. She does not give voices to others but uses her expression and tone to give you impressions of the other characters in this book. I think listening to this book gave me the opportunity to feel this story more than if I had read it. It was very well done. The publisher generously provided me with a copy of this book upon request. The rating, ideas and opinions shared are my own.

Synopsis: Set against the Frankfurt Auschwitz Trials of 1963, Annette Hess’s international bestseller is a harrowing yet ultimately uplifting coming-of-age story about a young female translator—caught between societal and familial expectations and her unique ability to speak truth to power—as she fights to expose the dark truths of her nation’s past.

For twenty-four-year-old Eva Bruhn, World War II is a foggy childhood memory. At the war’s end, Frankfurt was a smoldering ruin, severely damaged by the Allied bombings. But that was two decades ago. Now it is 1963, and the city’s streets, once cratered are smooth and paved. Shiny new stores replace scorched rubble. Eager for her wealthy suitor, Jürgen Schoorman, to propose, Eva dreams of starting a new life away from her parents and sister. But Eva’s plans are turned upside down when an American investigator, David Miller, hires her as a translator for a war crimes trial.

As she becomes more deeply involved in the Frankfurt Trials, Eva begins to question her family’s silence on the war and her future. Why do her parents refuse to talk about what happened? What are they hiding? Does she really love Jürgen and will she be happy as a housewife? Though it means going against the wishes of her family and her lover, Eva, propelled by her own conscience , joins a team of fiery prosecutors determined to bring the Nazis to justice—a decision that will help change the present and the past of her nation.

About the Author: Annette Hess grew up in Hanover and currently lives in Lower Saxony. She initially studied painting and interior design, and later scenic writing. She worked as a freelance journalist and assistant director, before launching a successful career as a screenwriter. Her critically-acclaimed and popular television series Weissensee, Ku’damm 56 and Ku’damm 59 are credited with revitalizing German TV. She has received numerous awards from the Grimme Prize to the Frankfurt Prize to the German Television Prize. The German House is her first novel.

One thought on “The German House by Annette Hess, Translated by Elisabeth Lauffer, Narrated by Nina Franoszek”