I had read so many reviews of this book that I wanted to see what all the excitement was about. It had read rave reviews and many of the bloggers I follow had rated this as one of the best books they read in 2019. I was able to get the audiobook through Scribd, so thought I would give it a listen. I hesitate to read hyped books, as I get my expectations up and it is hard for a book to measure up sometimes. 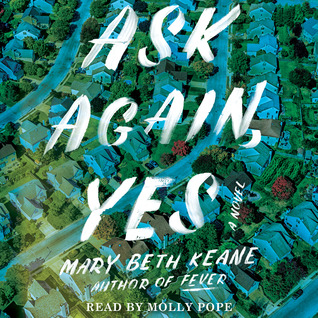 This is a book that would make an excellent group, buddy or club read. I finished this book several days ago and am still thinking about it. I have questions and I would love to have talked about it with others. This is a character driven story, with both strong and weak characters. It is a story about tragedy and how it affects everyone around it. It is a story about how a person’s past can affect the future, especially if it is buried and not dealt with. It is the story of love, mental health, addiction/alcoholism, abandonment, regret and eventually forgiveness.

Mary Beth Keane has written about characters that could be your neighbour. There were times I felt like a peeping Tom as we were given a look at the most intimate, and troubled times in the lives of the various characters. This is not a happy story, it is the story of sadness and vulnerability. The plot was good and well-written, but it was a bit too slow in the middle. Overall, I thought this was an honest and engrossing novel filled with lots of family drama. I enjoyed this novel, but did not love it as much as others did. I will say, if you enjoy a domestic drama that is a slow burn, then you will love this one. I listened to the audiobook from Scribd, narrated by Molly Pope. I really enjoyed her voice, the expression and inflection used. She helped to bring this story to life for me.

Synopsis: How much can a family forgive?

A profoundly moving novel about two neighboring families in a suburban town, the bond between their children, a tragedy that reverberates over four decades, the daily intimacies of marriage, and the power of forgiveness.

Francis Gleeson and Brian Stanhope, two rookie cops in the NYPD, live next door to each other outside the city. What happens behind closed doors in both houses—the loneliness of Francis’s wife, Lena, and the instability of Brian’s wife, Anne—sets the stage for the explosive events to come.

Ask Again, Yes is a deeply affecting exploration of the lifelong friendship and love that blossoms between Francis and Lena’s daughter, Kate, and Brian and Anne’s son, Peter. Luminous, heartbreaking, and redemptive, Ask Again, Yes reveals the way childhood memories change when viewed from the distance of adulthood—villains lose their menace and those who appeared innocent seem less so. Kate and Peter’s love story, while tested by echoes from the past, is marked by tenderness, generosity, and grace.