The Hope (The Amish of Cedar Grove #2) by Patricia Davids, Narrated by Christina Traister

The Hope (The Amish of Cedar Grove #2) by Patricia Davids, Narrated by Christina Traister

The Hope by Patricia Davids is the second novel in The Amish of Cedar Grove series, but it can be read as a standalone story. It is a sweet story about second chances, hope, love and unexpected surprises. Ruth Mast is a strong woman who is a widow with two children. Her eldest, Ella has recently married and is leaving for her honeymoon. After that they will be moving to another community. Ruth’s son Faron has wanderlust in his eyes, so he leaves on a fishing trip. Owen Mast was orphaned when his parents were killed in a buggy accident. He remained in Cedar Grove with his uncle, while his sister Rebecca, only three, was sent to live with an aunt in a different community. Owen has spent all his adult life looking for his sister. The problem was that he left Ruth behind in Cedar Grove and she married his best friend. He is now back helping Ruth with the lambing while her son and his uncle are away. When they find a three year old girl, the mystery of who she is, where she came from, and where her mam is take a backseat to taking care of and falling in love with Grace.

The Hope is a multifaceted novel. There is the budding romance of Owen and Rebecca, the loss of family, taking care of Grace and looking after the sheep. It was interesting to see how the Amish deal with orphans and how the Englisch do the same. I enjoyed learning about the sheep, I had never heard of Icelandic Sheep, and how many mothers reject their lambs. The story has romance and mystery mixed in with mending broken fences. The Hope was well-written and had a nice steady pace. There was a good flow between Owen and Ruth’s sections. I like that we get to see the situation from both main character’s point of view. Once I started listening to The Hope, I kept going in finished it within the day. I loved the ending, but I knew it had to work out. There is another storyline involving the mystery of Grace’s mom, that took a huge twist and shows that there is no such thing as a coincidence. The Hope is a captivating story that will tug at your heart.

The narration was equally well-done. The narrator, Christina Traister, gave voice to both of the main characters in a clear, identifiable way. I loved the voice she gave Grace. It was sweet and adorable, but her language made her seem to be much older than three. The expression, inflection and voices she used brought this book to life for me. I will look for more book narrated by this talented voice actress. The publisher generously provided me with a copy of this book upon request. The rating, ideas and opinions shared are my own. 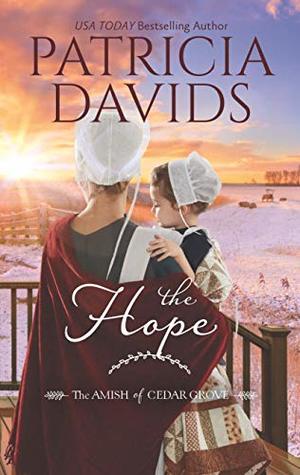 Synopsis: Home isn’t just a place…Amish widow Ruth Mast wants nothing to do with the handsome man from her past who just returned to Cedar Grove. Ruth learned the hard way that Owen Mast’s restlessness always causes trouble. But when a little Amish girl appears on Owen’s porch, lost and afraid, Ruth has no choice but to help the man who only ever causes heartbreak…All Owen wanted was to make amends with Ruth and her family. He never imagined that little Grace–or the strange mystery surrounding her–would bring him closer to Ruth. Or that a tender and unexpected attraction would quickly take hold of them both. But even a wandering heart can grow roots…when there is hope for love.