City of Girls is classified as Historical Fiction and that history is told through the life of Vivian Morris. Vivian is in her nineties and has received a letter from a young woman by the name of Angela. Angela is letting her know that her mother has died and she has questions about Vivian’s relationship with her father. Vivian writes a letter to Angela that tells us all about her life from the time she left home to go to Vassar until the present when she is writing the letter. I am not going to regurgitate the synopsis of this book for you, I am going to tell you how it made me feel and what I enjoyed about this story, because, I did enjoy it.

One thing I liked was how Vivian was able to reflect on her life as she wrote and she realized many things that she had never thought about before such as why she did so poorly at Vassar that year. We learn about her family through her eyes. They were concerned about what people thought of them, which was common with affluent families in the 40s. Vivian was swallowed up in the life of the theatre when she went to New York. She became promiscuous, without always thinking about the consequences of her action. We also met many characters from the theatre or those that were involved with them. There were gay characters, selfish characters, talented characters and nasty characters. Those that make a living by destroying the lives of others, i.e. gossip columnists, were in this story, but we actually got to see the soft side of Walter Winchell, at least in this story.

I didn’t always like Vivian. She was selfish at times, only interested in having a good time, but she evolved and by the end of the story, I really liked her and would have loved to meet her. She was smart, strong, creative, witty, loyal and loving. I loved how she realized that the family you choose is as important as the family you are born into. This is a well-written coming of age story about a self-absorbed woman who changes as she grows older. It is engaging, written in a time that was consumed by war and the aftermath in most books. This story deals with what was happening back in the US at that time, something that I didn’t know a lot about. I was engrossed in this story. The beginning exciting, fun, full of life, then the end quiet, reflective and satisfying. I recommend this one to those who enjoy historical fiction told in a memoir type story, you won’t be disappointed with this one. 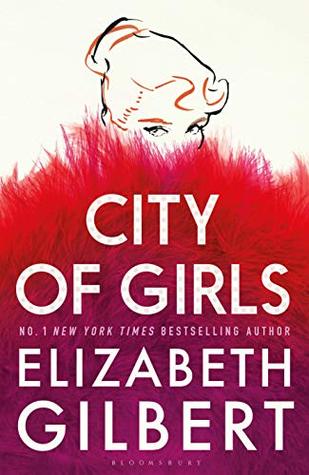 About the Book: Life is both fleeting and dangerous, and there is no point in denying yourself pleasure, or being anything other than what you are.

Beloved author Elizabeth Gilbert returns to fiction with a unique love story set in the New York City theater world during the 1940s. Told from the perspective of an older woman as she looks back on her youth with both pleasure and regret (but mostly pleasure), City of Girls explores themes of female sexuality and promiscuity, as well as the idiosyncrasies of true love.

In 1940, nineteen-year-old Vivian Morris has just been kicked out of Vassar College, owing to her lackluster freshman-year performance. Her affluent parents send her to Manhattan to live with her Aunt Peg, who owns a flamboyant, crumbling midtown theater called the Lily Playhouse. There Vivian is introduced to an entire cosmos of unconventional and charismatic characters, from the fun-chasing showgirls to a sexy male actor, a grand-dame actress, a lady-killer writer, and no-nonsense stage manager. But when Vivian makes a personal mistake that results in professional scandal, it turns her new world upside down in ways that it will take her years to fully understand. Ultimately, though, it leads her to a new understanding of the kind of life she craves-and the kind of freedom it takes to pursue it. It will also lead to the love of her life, a love that stands out from all the rest.

Now ninety-five years old and telling her story at last, Vivian recalls how the events of those years altered the course of her life – and the gusto and autonomy with which she approached it. At some point in a woman’s life, she just gets tired of being ashamed all the time, she muses. After that, she is free to become whoever she truly is. Written with a powerful wisdom about human desire and connection, City of Girls is a love story like no other.

16 thoughts on “City of Girls by Elizabeth Gilbert”