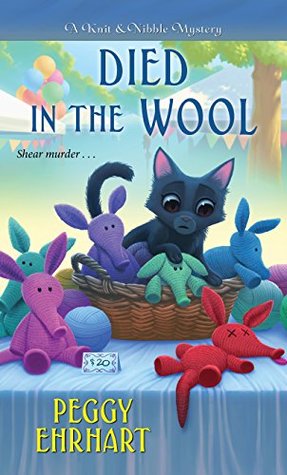 In this second outing of the Knit & Nibble Mystery series, we’re back in Arborville just in time for a fundraiser for the sports program at the high school. The Knit and Nibblers have created 25 stuffed aardvarks to sell in their booth. Believe it or not, the aardvark is the school mascot. When the day is winding down Bettina and Pamela realize 2 knit aardvarks have gone missing. As they pack up, they remove the canvas around the bottom of the table and find one of the missing aardvarks, unfortunately, that is not all they find. They also find a very dead Randall Jefferson, a history teacher at the school, who has been a vocal opponent to the sports program, and their aardvark is on his chest. Because of where the body was found and the presence of the aardvark the community blames the group of knitters for the death even though they have no motive. To clear the group the knitters, Pamela and her friend and sidekick, Bettina, are going to have to figure out what really happened and who was behind this heinous act. Will finding the 2nd missing aardvark lead them in the right direction? Will they find the second aardvark with another body?

The Knit and Nibbler’s knitting group is an eclectic group. All with their own strengths and weaknesses. I enjoyed visiting with this group again and getting to know their newest member, Holly, a young woman who reminds Pamela of her daughter, Penny. I enjoy the characters in this group. They are people I can identify with and would love to be their friend and part of their knitting group (even though I don’t knit). I found the mystery to be well-plotted and entertaining, with a lot of clues to follow, red herrings along the way and a few suspects to consider. The story is well-written with a lot of description, which at times can be a bit too much, but it is still interesting. The townsfolk in this small town, are not as friendly or helpful as in some of the other cozies I have read. They were pretty quick to point fingers without any evidence and blame the knitters for a pretty flimsy reason. All is well at the end, and I enjoyed following Pamela and Bettina in their sleuthing to figure out who was responsible.

About the Book: When a murder shocks picturesque Arborville, New Jersey, Pamela Paterson and her Knit and Nibble knitting club suddenly find themselves at the center of the investigation–as suspects . . .

Pamela is ready to kick back and relax after a busy day selling stuffed aardvarks to benefit Arborville High School’s sports program at the annual town festival. But just as she’s packing up, she makes a terrible discovery–someone’s stashed a body under the Knit and Nibble’s table. The victim is Randall Jefferson, a decidedly unpopular history teacher after his recent op-ed criticizing the school’s sports program. But the primary suspect has an alibi, and the only clue is a stuffed aardvark found on the victim’s chest . . . Now the Knit and Nibblers must unravel the case quickly–before a crafty killer repeats a deadly pattern.