Magic Under the Mistletoe by Lucy Coleman, Review & Giveaway @rararesources

Magic Under the Mistletoe by Lucy Coleman

About the Book: Christmas and romance are in the air…

It’s December 23rd and while everyone else is rushing home for the holidays, workaholic Leesa Oliver is dreading switching on her out-of-office for the festive season. And it seems her equally driven boss, Cary Anderson, isn’t relishing spending Christmas at his family’s country estate either.

So together, they draft an unexpected Christmas contract: They’ll spend half of the holidays with each other’s families, pretending to be a couple. Leesa knows the insufferably good-looking Cary will make her Christmas more bearable, but what happens after the last of the mince pies have been eaten…?

Leesa signed off on a sensible business agreement, but somewhere, amongst the fairy lights and carols something seems to have changed… It seems there might just be some magic under the mistletoe this Christmas!

Leesa Oliver should have been home a week earlier with her feet up relaxing to prepare for spending Christmas with her ex-in-laws, not on a crowded plane with a rowdy toddler, kicking her in the face. Her boss, Cary Anderson, the reason she is so late getting back to the UK from Australia, also wishes he was not on the plane, but it is because he dreads spending Christmas with his family. Cary has a self-described dysfunctional family, and Leesa is supposed to buoy up her inlaws after the death of Gwen’s mother and the defection of their son, Leesa’s ex-husband who is now in a relationship with her best friend. Arriving on December 23rd in Cardiff, with blizzard conditions, road closures and both dreading being with their families, they make it to Cary’s family home with his grandmother, Cressida, assuming they are a couple. Cary’s grandmother, who raised him, wants him to find a woman to love and settle down, Leesa wants to free herself from her ex-husband’s family. They come up with a plan. They are going to spend the holidays with their own relatives, but pretend to be a couple, calling and texting one another to keep in touch. It’s supposed to be a business arrangement, but we all know the best laid plans do not always work out. This is similar to the trope of co-workers pretending to be dating to get their parents off their back, but this one is just a bit different.

I really liked the characters in this story. Cary and Leesa are both workaholics, running their own businesses. They have both been hurt romantically and decided that they do not need a romantic relationship. As they got to know each other I like how they share their secrets and feelings with one another. Cary was somewhat brusque at the beginning, but as he got to know Leesa, he loosened up. It was nice to see their relationship change and blossom slowly into a romance. I really liked Cary’s grandparents. They were very different and had their own secrets and issues to deal with. That was another storyline that was very interesting and added another dimension to the story. This story takes it’s time. It starts just before Christmas, but there is a full year before the characters get their Happily Ever After. It is not all light and airy, there is some turmoil and some difficult issues to deal with. My one complaint is that the story is a bit long. There is a lot of discussion about work, that I could have done without. Saying that, I did enjoy this story. It is a story where love and time helps heal emotional wounds and enables several characters to find magic under the mistletoe. If you enjoy romance, especially festive stories, with family drama, then you need to pick this one up. The publisher generously provided me with a copy of this book upon request. The rating, ideas and opinions shared are my own. 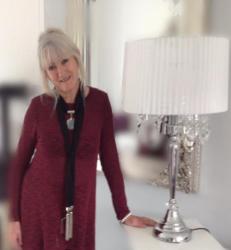 About the Author: From interior designer to author, Linn B. Halton – who also writes under the pen name of Lucy Coleman – says ‘it’s been a fantastic journey!’

Linn is the bestselling author of more than a dozen novels and is excited to be writing for both Aria Fiction (Head of Zeus) and Harper Impulse (Harper Collins); she’s represented by Sara Keane of the Keane Kataria Literary Agency.

When she’s not writing, or spending time with the family, she’s either upcycling furniture or working in the garden.

Living in Coed Duon in the Welsh Valleys with her ‘rock’, Lawrence, and gorgeous Bengal cat Ziggy, she freely admits she’s an eternal romantic.

Linn is a member of the Romantic Novelists’ Association and the Society of Authors. She writes feel-good, uplifting novels about life, love and relationships.

9 thoughts on “Magic Under the Mistletoe by Lucy Coleman, Review & Giveaway @rararesources”