Handle With Care (Shacking Up, #5) by Helena Hunting, Narrated by Andi Arndt and Jacob Morgan 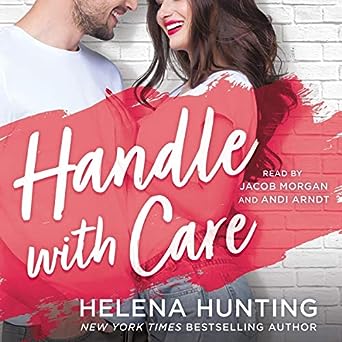 Handle With Care (Shacking Up, #5) by Helena Hunting, Narrated by Andi Arndt and Jacob Morgan

This is the 5th book in the Shacking Up series, but it can be read as a standalone. I have not read any other books by this author, but had no problems following this story. This is a romantic comedy, with some other plotlines such as infidelity, sexual harassment, family relationships, wealth vs helping others in the world, and honesty. The two main characters. Wren Starling and Lincoln Moorehead are extremely likable, honest and altruistic characters. Wren has been hired by Moorehead Media to “handle” Armstrong Moorehead. He needs a PR consultant and a wrangler. Wren is amazing at both. Armstrong is the selfish, spoiled, sex-addicted younger son of Fredrick, the CEO of the company. When Fredrick dies unexpectedly, his older son, Lincoln is tapped on the shoulder to take over the company. He wants nothing to do with it, but promises his grandmother to help. Wren’s contract is extended to work with Lincoln. He is not an executive. He has long hair, a beard, and is most comfortable in comfy jeans and humorous t-shirts. Wren is tasked to turn him into an executive and keep him in line. She works hard to get him to keep his appointments and change his look. During this time they get to know each other and discover they are more alike than different. There is also a lot of sexual tension in the air. Will they cross the lines of employee/employer?

It will come as no surprise that these two get together physically and emotionally. This is not your typical working class girl falls for rich, handsome boss. Wren’s family is well off, but she is working hard to sock away money so she can eventually work at a non-profit to make a difference in the world. She is smart, beautiful, a hard worker, physically able to protect herself and stubborn. She is able to stand up to Lincoln and get him to do what she wants. Lincoln has some baggage from his youth that makes you feel so bad for him. The rest of Lincoln’s family left me with a bad taste in my mouth. Armstrong will make you wonder about how exactly his parents managed to bring up such different sons. Gwendolyn Moorhead, their mother, was not a nice person at all. She plays games with others’ lives and as we learn her story, I like her even less. This story touches on several different things as I mentioned before, and that was what kept me interested in this story. When Wren and Lincoln finally act on their feelings, there are a couple of steamy love scenes. There are a couple of scenes in this book that I found a bit distasteful, but I think that is my age speaking. Overall, this is a good story with characters that I really liked. There’s definitely enough chemistry, understanding and sexual tension between the two main characters to satisfy a romantic comedy fan as well as fans of this series. It was a nice way to spend a rainy day reading.

I listened to the audiobook narrated by Andi Arndt and Jacob Morgan. I liked that there were both male and female narrators. It gives a much more realistic voice to the various characters. i enjoyed the narration of this book with the narrators using great expression, inflection and voice to allow me to feel like I was part of the story, the proverbial fly in the wall. This is the first time I have listened to either of these talented narrators and I will definitely not hesitate to listen to others. The publisher generously provided me with a copy of this audiobook upon request. The rating, ideas and opinions shared are my own.

About the Book: HE WANTS TO LOSE CONTROL.
Between his parents’ messed up marriage and his narcissistic younger brother, Lincoln Moorehead has spent the majority of his life avoiding his family. After the death of his father, Lincoln finds himself in the middle of the drama. To top it all off, he’s been named CEO of Moorehead Media, much to his brother’s chagrin. But Lincoln’s bad attitude softens when he meets the no-nonsense, gorgeous woman who has been given the task of transforming him from the gruff, wilderness guy to a suave businessman.

SHE’S TRYING TO HOLD IT TOGETHER.
Wren Sterling has been working double time to keep the indiscretions at Moorehead Media at bay, so when she’s presented with a new contract, with new responsibilities and additional incentives, she agrees. Working with the reclusive oldest son of a ridiculously entitled family is worth the hassle if it means she’s that much closer to pursuing her own dreams. What Wren doesn’t expect is to find herself attracted to him, or for it to be mutual. And she certainly doesn’t expect to fall for Lincoln. But when a shocking new Moorehead scandal comes to light, she’s forced to choose between her own family and the broody, cynical CEO.