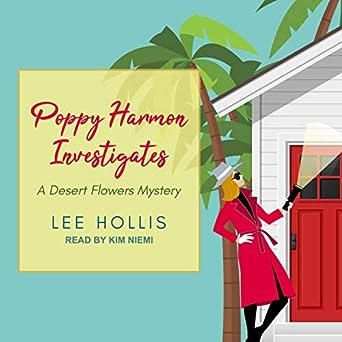 Poppy Harmon is a more mature sleuth, who has to find a job to support herself after being involved in charity work and raising her daughter. She finds herself penniless and in debt after the death of her third husband. She was an actress who worked on a detective series earlier in her life, and using what she learned on the set, assisting the writer, as well as her skills of observation and solving puzzles, she applies for a Private Investigator licence. With the backing of her two best friends, Violet and Iris, she opens the Desert Flowers detective agency. Unfortunately, no one is interested in hiring a group of middle aged women as PIs. Deciding to take on Matt, Poppy’s daughter’s boyfriend as a front (think Remington Steele) they get their first case, a robbery. Of course, during the investigation, a murder occurs and they have more on their plate than they expected.

Poppy is a great character. She refuses to take charity from her friends, Violet and Iris, and make a go of her new career. She is smart, intuitive and extremely observant, all great skills for her new profession. Violet is a hoot. She brings in her 12 year old grandson, Wyatt, to be their technical advisor and he has some wicked skills. Poppy is pretty apprehensive about his hacking, but Violet is more results driven. Iris takes a bit getting used to. She is a gruff, tell it like it is woman, who is loyal to her friends and wants to help Poppy recover. Then there is Matt. He is a struggling actor, extremely handsome, and thinks this is a great gig to improve his acting. He is a bit of a media hog and takes the credit for Poppy’s investigative work, but by the end of the story, he comes around a bit and I actually liked him. Poppy’s daughter, I had some issues with. Not only was she keeping secrets from her mother, but was rather demeaning to her. Again, my opinions changed as the story wrapped up. The mystery was well written. There were a lot of suspects in the murder, as well as the robberies. Were they connected was another puzzle. I enjoyed how Poppy and her friends puzzled it out, used their acting skills to throw suspects off and had fun doing it. This is a great start to a new series and I am looking forward to seeing what Lee Hollis has in store for her readers in the next book in this series.

I listened to the audiobook narrated by Kim Niemi. I have listened to others with this narrator and really enjoy her voice performances. I loved the voices she gave the characters. Iris and her over-the-top German accent is fun, especially with her acerbic nature. Her expression and emotion when performing this story was well done, with her being able to sound soothing, sad, resigned and indignant all in a matter of minutes. I thoroughly enjoyed this audiobook and will continue to look for others narrated by this talented voice actress. The publisher generously provided me with a copy of this audiobook upon request. The rating, ideas and opinions shared are my own.

About the Book: When Poppy goes from complacent retiree to penniless widow in a matter of weeks, the idea of spending her golden years as the biggest charity case in Palm Springs renders her speechless. With no real skills and nothing left to lose, Poppy uses her obsession with true crime shows to start a career as a private eye….

But after opening the Desert Flowers Detective Agency with help from her two best friends, Violet and Iris, Poppy realizes that age brings wisdom, not business – until she convinces her daughter’s handsome boyfriend, Matt, to pose as the face of the agency. It’s not long before Matt’s irresistible act snags a client desperate to retrieve priceless jewelry burglarized from an aging actress at the Palm Leaf Retirement Village. Or before Poppy stumbles upon the bloodied body of the victim’s arch rival….

In a flash, Poppy’s innocent detective gig is upstaged by a dangerous murder investigation riddled with slimy suspects and unspeakable scandal. As she and her team uncover the truth, Poppy must confront the secrets about her late husband’s past and swiftly catch a killer lurking around the retirement community – even if it means turning her world upside down all over again.