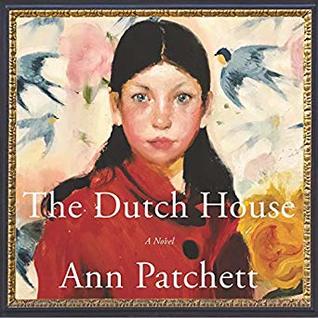 I finished listening to The Dutch House, narrated by Tom Hanks and it felt like I was saying goodbye to friends. I am still thinking about this story, it’s characters, the themes, and the house itself. This is something very different from anything I have read before. This is a modern day fairytale, complete with the evil stepmother, a father dying young and children exiled from the life they knew. The story is told from the point of view of Danny Conroy, the youngest of the two Conroy children.

Danny Conroy and his sister, Maeve, grow up in a huge home that is the Dutch House, a 1920s mansion in Elkins Park, Pennsylvania. It’s a building with huge, wide windows, giving every passerby the opportunity to look inside. Danny’s narration is a look inside the lives of the Conroy family. Cyril Conroy was a self-made man who bought the Dutch House and all its contents. His wife hated the house, and eventually left, leaving the children behind. When Danny is 10, his father remarries and moves in with her two daughters. Danny and Maeve love the children, they do not love their new step-mother and the feeling is mutual. When their father dies unexpectedly five years later, Danny is thrown out of the house to move in with Maeve, they only have each other to rely on.

This is a story about family, decisions, forgiveness, obsession, dreams, and honesty. The Dutch House is as much a character in this book as the human characters, as this story shows us how one family’s dynamics are affected by it as well as each other. There were times that I loved Maeve and times that I was so angry with her. She pushed Danny to follow a path that was not his, but was for revenge. She also didn’t take care of herself like she should have causing a lot of grief. Having said that, the relationship between her and Danny was amazing. This was sibling love that was far-reaching and unshakable. When their mother returns, it is heartbreaking to see how Danny’s emotions are brought to the surface for a person that he really didn’t know. This book is very much character driven, not plot driven. We go through the lifespan of a family and witness their lives. There are a lot of other characters, but they all revolve around Danny and Maeve. The Dutch House is a slow, but immersive story. Before you know it, you’re drawn to these characters and want to know what’s going on in their simple lives. It was a book that was not on my radar until I saw that Tom Hanks was narrating it and I jumped at the chance to listen to it. I was hooked by this story and definitely recommend it to lovers of family sagas, something a bit different, and even those who love modern day fairytales. Tom Hanks did an amazing job with the narration. He was Danny in my mind and I definitely recommend you listen to this one if you have the opportunity. The publisher generously provided me with a copy of this audiobook at my request. The rating, ideas and opinions shared are my own.

Synopsis:  “Do you think it’s possible to ever see the past as it actually was? I asked my sister. We were sitting in her car, parked in front of the Dutch House in the broad daylight of early summer.

At the end of the Second World War, Cyril Conroy combines luck and a single canny investment to begin an enormous real estate empire, propelling his family from poverty to enormous wealth. His first order of business is to buy the Dutch House, a lavish estate in the suburbs outside of Philadelphia. Meant as a surprise for his wife, the house sets in motion the undoing of everyone he loves.

The story is told by Cyril’s son, Danny, as he and his older sister, the brilliantly acerbic and self-assured Maeve, are exiled from the house where they grew up by their stepmother. The two wealthy siblings are thrown back escaped from and find that all they have to count on is one another. It is this unshakable bond their lives and thwarts their futures.

Set over the course of five decades, ‘The Dutch House’ is a dark fairy tale about two smart people who cannot overcome their past. Despite every outward sign of success, Danny and Maeve are only truly comfortable when they’re together. Throughout their lives , they return to the well-worn story of what they’ve lost with humor and rage. But when at last they’re forced to confront the people who left them behind, the relationship between an indulged brother and his ever-protective sister is finally tested.

“The Dutch House” is the story of a paradise lost, a tour de force that digs deeply into questions of inheritance, love, and forgiveness, of how we want to see ourselves and of who we really are. Filled with suspense, you may listen to it quickly to find out what happens, but what happens to Danny and Maeve will stay with you for a very long time.