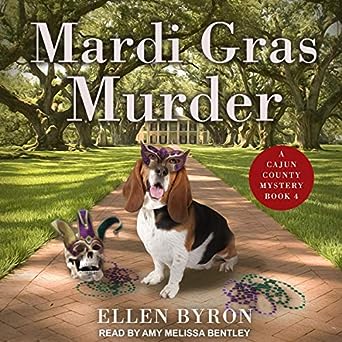 A torrential rainfall hits the small town of Pelican, Louisiana, causing flooding and massive damage. After the flood waters recede, the only death was a stranger who was found in a ditch near the Crozat Plantation B&B. Maggie Crozat feels it is her family’s responsibility to determine who this man is and once it is determined that he was murders, not drowned, who killed him. It is also Mardi Gras season and the tourist still expect celebrations so the town is trying to move forward. As the town prepares for the local pageant. Maggie is tapped to be a judge when her grandmother ends up with pneumonia. Throw in the opening of the Louisiana Orphan Train exhibit, the Gumbo competition, Maggie finding a painting that has another one underneath, and a possible treasure hunt and Maggie is extremely busy. When a local man is also murdered, Maggie works with the police to determine who the murderer is and why.

There are a few things I really enjoy about this series. First is the customs and way of life that is shared with the guests and the reader. We learn about the Mardi Gras celebrations as well as the intricacies of small town Louisiana living. The characters and their relationships also bring so much to this series. When Maggie’s beau, Bo and his cousin Ru head off to New York to get information on the murder victim, Maggie is left to investigate on her own. I love the phonecalls from New York sharing the goings on and the way Ru ingratiates himself with the New York police department, (note sarcasm here). Throw in the contestants in the pageant, Maggie’s family and you have a good character driven story. Don’t think the murder was not a well-written one, as that is not my intention. It gave us plenty of suspects as the author delves in the past of Pelican and gives us a bit of history involving the Orphan Train. I figured out the motive for the murders early on, but the perpetrator was not as easy to figure out. There were plenty of suspects and since I had no idea of who I suspected, I just enjoyed the ride. The showdown was wonderful, well-plotted and unexpected. Those final scenes had me on the edge of my seat with a great ending. I definitely recommend this story to anyone who enjoys a well-written and plotted cozy mystery, with great characters, interesting twists and a bit of historical information shared within the storyline. It will not disappoint.

I listened to the audiobook of A Cajun Christmas Killing narrated by Amy Melissa Bentley. I enjoyed her narration. She has a young voice which fits well with most of the characters in the story. She does the southern accent for Maggie’s mom and grandmother very well, and even the male voices are okay to listen to. I have read other books in this series narrated by Ms. Bentley and I am coming to recognize the voices of these characters. Her pacing, tone and inflection were right on for me and added to my enjoyment of this story. The publisher generously provided me with a copy of this book upon my request, the rating, ideas and opinions shared are my own. 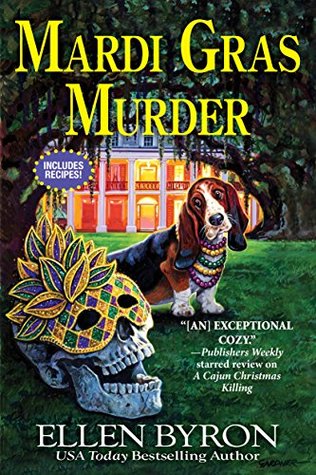 Synopsis: Southern charm meets the dark mystery of the bayou as a hundred-year flood, a malicious murder, and a most unusual Mardi Gras converge at the Crozat Plantation B&B.

It’s Mardi Gras season on the bayou, which means parades, pageantry, and gumbo galore. But when a flood upends life in the tiny town of Pelican, Louisiana—and deposits a body of a stranger behind the Crozat Plantation B&B—the celebration takes a decidedly dark turn. The citizens of Pelican are ready to Laissez les bon temps rouler—but there’s beaucoup bad blood on hand this Mardi Gras.

Maggie Crozat is determined to give the stranger a name and find out why he was murdered. The post-flood recovery has delayed the opening of a controversial exhibit about the little-known Louisiana Orphan Train. And when a judge for the Miss Pelican Mardi Gras Gumbo Queen pageant is shot, Maggie’s convinced the murder is connected to the body on the bayou. Does someone covet the pageant queen crown enough to kill for it? Could the deaths be related to the Orphan Train, which delivered its last charges to Louisiana in 1929? The leads are thin on this Fat Tuesday—and until the killer is unmasked, no one in Pelican is safe.