Fiona and the Whale by Hannah Lynn, Review and Giveaway @rararesources @HMLynnauthor

Fiona and the Whale by Hannah Lynn

Synopsis: With her personal life on the rocks, it’s going to take a whale sized miracle to keep her afloat.

Event planner Fiona Reeves did not have her husband’s sudden departure on her schedule. However, she’s certain that it’s only a hiccup and he’ll be back in no time, begging for forgiveness. Fortunately there’s a distraction of mammoth proportions swimming in the River Thames.

Absorbed by the story of Martha the sperm whale, Fiona attempts to carry on life as usual as she awaits her husband’s return. However, nothing can prepare her for the dramatic turn of events that throws her life into ever greater turmoil. The road ahead has many paths and for Fiona it’s time to sink or swim.

Fiona and the Whale is a poignant and often hilarious contemporary fiction novel. If you enjoy topical tales, second chances and a little bit of romance, you’ll love this new book from the Kindle Storyteller Award Winner, Hannah Lynn.

When I read the synopsis of this book, I thought it would be a fun, contemporary, chick-lit story. well it was that, but it was so much more. Fiona’s life has taken a turn, a left turn and she is not sure what is going to happen next. When she becomes invested in the story of Martha, the whale that is stranded in the Thames, the last thing she expects is a kick in the gut that kick-starts a complete change in her life and business.

Fiona is a typical business woman, busy, blase about the environment, taking on new clients and making money. When she realized that perhaps her purchase of a helium balloon on her son’s 6th birthday might have contributed to the death of Martha the whale, she goes into a tailspin. She realizes that she needs to do more and is willing to take the risks to stick to her principals and become an ethical business woman, actually doing something to help the environment. She is dealing with a plethora of emotions. First the empty nest when her son goes off to university, an abandoned wife when her husband of years walks out on her, the loss of her company when her clients abandon this new idea or hers and move on and finally the pride she feels when she sticks to her guns. Is this just a reaction to her husband walking out on her? Some of her clients think that is the case, but guess again. Throw in an ethical, romantic interest who is handsome and smart and it helps to bring Fiona back to life.

I don’t want to give away this story because you need to read it. You need to travel the path that Fiona travels in this story. The message about the environment is not subtle and the banning of single use plastics it necessary and real, but it is all wrapped up with a great story. This is a well-written story that is very cleverly done. All of a sudden, you find you’re not just reading a good story any more, but a book that is making you think about the future of the planet. At times it is quirky, at times very emotional and at times sweet, but always enjoyable and definitely thought provoking. This is the first story I have read by Hannah M. Lynn, but I will be looking for more. I received a copy of this book from Rachel’s Random Resources upon request. The rating, ideas and opinions shared are my own. 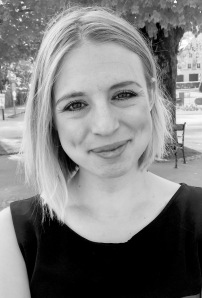 About the Author: Hannah Lynn is an award-winning novelist. Publishing her first book, Amendments – a dark, dystopian speculative fiction novel, in 2015, she has since gone on to write The Afterlife of Walter Augustus, a contemporary fiction novel with a supernatural twist – which won the 2018 Kindle Storyteller Award and the Gold Medal for Best Adult Fiction ebook at this year’s IPPY Awards – and the delightfully funny and poignant Peas and Carrots series.

While she freely moves between genres, her novels are recognisable for their character driven stories and wonderfully vivid description. She is currently working on a YA Vampire series and a reimagining of a classic Greek myth.

Born in 1984, Hannah grew up in the Cotswolds, UK. After graduating from university, she spent ten years as a teacher of physics, first in the UK and then around Asia. It was during this time, inspired by the imaginations of the young people she taught, she began writing short stories for children, and later adult fiction Now as a teacher, writer, wife and mother, she is currently living in the Austrian Alps.

6 thoughts on “Fiona and the Whale by Hannah Lynn, Review and Giveaway @rararesources @HMLynnauthor”