Forged Through Fire: A Reconstructive Surgeon’s Story of Survival, Faith, and Healing by Mark D. McDonough 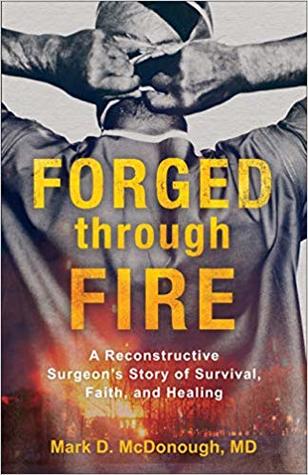 Forged Through Fire: A Reconstructive Surgeon’s Story of Survival, Faith, and Healing by Mark D. McDonough

This is a very emotional, yet uplifting story. Mark McDonough shares his life with us, the ups and the downs. He went through a lot as a young child with Guillain-Barre Syndrome, a debilitating neurological disease, where he ended up in an iron lung. Later, at the age of 17, he survived a house fire that claimed the lives of his mother and youngest brother and left him with extensive burns over 60% of his body. This is his story of his recovery, his doubts, his faith and love. Dealing not only with multiple surgeries, one when he died and returned to life, but he became an alcoholic, using alcohol originally to dull the pain. With all the experiences he dealt with, he knew he wanted to help people who had suffered burns, or body disfigurement from illness or accident. His journey was intense, sad at times and very emotional. He also discusses how this affects the whole family, with some difficult situations evolving. Growing in his faith as he dealt with one setback after another, was indeed inspirational. It was not easy, yet it was what kept him going. Each time he listened to what God was telling him and watched for signs that answered his prayers, he moved forward with his life.

My husband suffered bad electrical burns shortly after we were married and had to undergo several surgeries. He was in the hospital for 3 months and had to have a flap graph surgery, so as I read about this in the book, I made a personal connection. I am also familiar with the case involving his sons at the end of the book and the details in that part of the story, gave me more insight into that case. This was a book that I had to read over several days, as I had to take breaks from reading it. It is a very emotional and heartbreaking story, but the inspiration I got and the strength of spirit that Mark D. McDonough shows is amazing. I definitely recommend this book. The publisher generously provided me a copy of this book through Just Read. The rating, ideas and opinions shared are my own.

Synopsis: When Mark McDonough was a teen, a catastrophic fire claimed the lives of his mother and younger brother. It also left Mark with burns on over 65 percent of his body. During a long and painful recovery, his faltering faith in God was strengthened by a remarkable near-death experience. Inspired to pursue a career as a plastic surgeon to help those who suffer as he has, McDonough has overcome numerous other adversities on his journey, including addiction and a stroke. Now he shares his incredible true story of survival and perseverance to bring hope and healing to those dealing with great physical and emotional pain.

Anyone who has suffered or watched a loved one suffer from a personal trauma, disease, or loss that has tested or stolen their faith and exhausted their emotional resources will find real hope in this redemptive story.

About the Author: Mark D. McDonough, MD, is a therapist, physician, and plastic and reconstructive surgeon. A graduate of Case Western University School of Medicine and trained in general, burn, and plastic surgery at the University of South Florida and Vanderbilt University, he has served as an adjunct professor in physical therapy and worked with trauma patients at hospitals in Ohio, Tennessee, and Florida, where he later founded his own practice. Married for more than 25 years, he and his wife, Joan, have three grown sons–Connor, Riley, and Toby–who form the popular band Before You Exit. Dr. McDonough lives in Central Florida. Visit his website to read more of his story. https://drmarkmcd.com/my-story/

5 thoughts on “Forged Through Fire: A Reconstructive Surgeon’s Story of Survival, Faith, and Healing by Mark D. McDonough”