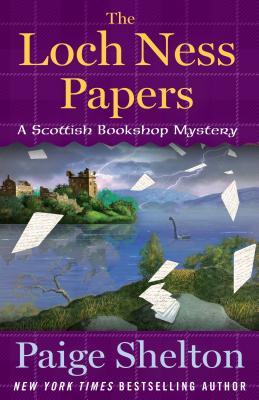 This is the fourth book in the Scottish Bookshop Mystery, and although it can be read as a standalone, I recommend you read this series in order to get the full history of the series and the character development that has occured.

In this outing, Delaney and Tom are planning their wedding. They have had a few setbacks in their plans so Delaney is visiting a church to see if the Minister will consider performing the wedding. While there she bumps into an elderly Loch Ness enthusiast, who has collected many papers and information about sightings and proof of its existence. When his nephew turns up dead, he is the main suspect and Delaney can’t believe he could be a murderer. She puts her skills to work trying to prove his innocence.

I enjoyed the plot involving the existence of Nessie. It was a fun plotline that will capture the interest of many. The characters were a bit quirky and their was some subtle humour that I have come to expect from Paige Shelton. Although the mystery is about the murder, the papers and what they could prove was also something that had me thinking and wondering. Norval was a great character, with his quirkiness, yet his absolute belief that Nessie is real. There was some sadness as well, knowing that his father abandoned the family when he was young, yet he believed that Nessie had taken his dad. The mystery moved along at a nice pace with plenty of suspects and with Delaney busy asking questions and investigating. She was extremely busy with the mystery, planning her wedding and getting ready for her family arriving from the US. She also had her job and was investigating a book that had been brought to them from a loud, somewhat obnoxious Texan. The final reveal was not a total surprise, but it tied up loose ends very well. I enjoyed this story from start to finish. I especially love the setting. It is not an action packed cozy series, but it is an enjoyable one that I recommend, especially if you like stories set in Scotland. The publisher generously provided me with a copy of this book upon request. The rating, ideas and opinions shared are my own.

Synopsis: Bookseller Delaney Nichols befriends a Loch Ness monster enthusiast; when he stands accused of murder she’ll do whatever it takes to learn who the killer is―and whether Nessie herself is really lurking in the Scottish waters.

Delaney Nichols is delighted with her life in Edinburgh, working at The Cracked Spine―a shop that specializes in hard-to-find books and artifacts. With a job she loves, and her fast approaching marriage to devastatingly handsome Scottish pub-owner Tom Shannon, Delaney’s life could be straight out of a fairy tale―at least it would be, if the pastor meant to perform the wedding ceremony hadn’t recently passed away. Outside the church where Delaney is searching for another reverend, she stumbles across Norval Fraser: an elderly man obsessed with the Loch Ness monster. Always attracted to the interesting and unusual, Delaney befriends Norval. But when his nephew is found dead, the police decide Norval’s obsession has moved from monsters to murder.

With a wedding to plan, her family arriving soon from Kansas, and the arrival of an over-the-top Texan with a wildly valuable book, Delaney’s plate is full to bursting, but she can’t abandon her new friend. Determined to help Norval, she sets out to learn the truth. The Loch Ness buries its secrets deeply, but Delaney is determined to dig them up―whether Nessie likes it or not.