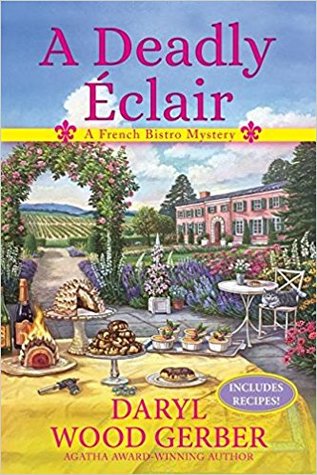 I have always enjoyed books by Daryl Wood Gerber, so decided I needed to finally read the first two books in this series. With this being the first book in a new series, there is some character development that is necessary, so it is a little slower than some of her other books, but I still very much enjoyed this story.

Mimi Rousseau is preparing for a celebrity wedding at her bistro and inn. Just as things get started, Bryan Baker, the uncle of the bride as well as Mimi’s mentor and financial backer, is found dead. What Mimi finds out is that in his will, her debt to him will be forgiven with his death. This makes her look mighty suspicious in the eyes of the law and she is obviously one of the main suspects. Afraid that she’ll lose both her business and her freedom, Mimi decides to do a little investigating herself.

Mimi is likable and friendly. She gets along well with her staff and is a great daughter. She is a good investigator, asks a lot of questions and sticks her nose in places that can get her into trouble. Her inn is the kind of place that sounds like it would make a fabulous place to take a vacation. The plot is well written and has just enough clues and red herrings to keep the reader guessing. Good food, great friends, and plenty of intrigue keep this story moving along. There are also some good recipes at the end of this book that would make any lover of culinary cozies happy in the kitchen.

About the Book: It’s always been Mimi Rousseau’s dream to open her own bistro, but it seems beyond her grasp since she’s been chased back home to Nouvelle Vie in Napa Valley by her late husband’s tremendous debt. Until her best friend Jorianne James introduces her to entrepreneur Bryan Baker who invests in promising prospects. Now, working the bistro and inn until she’s able to pay it off and call it her own, Mimi is throwing the inn’s first wedding ever.
The wedding will be the talk of the town, as famous talk show host Angelica Edmonton, daughter of Bryan’s half-brother, Edison, has chosen the inn as her perfect venue. Anxious, Mimi is sure things are going to turn south, especially when Edison gets drunk and rowdy at the out-of-towners’ dinner, but by the evening, things begin to look up again. That is until six AM rolls around, and Bryan is found dead at the bistro with an eclair stuffed in his mouth. And the fingers point at Mimi, whose entire loan is forgiven in Bryan’s will.
Now it’s up to Mimi to clear her name and get to the bottom of things before the killer turns up the heat again in A Deadly Eclair, the scrumptious series debut by Agatha Award-winning author Daryl Wood Gerber.