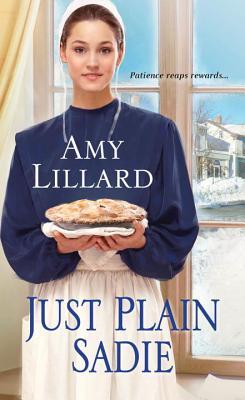 Everyone thinks Chris Flaud and Sadie Kauffman will be married, but when Chris shares with Sadie, that he going to see Europe, she realizes that will not happen. When she attends the local market looking for bison meat, she has a chance encounter with a handsome mennonite rancher, Ezra Hein. As their paths cross again while Sadie is feeling adrift, she realizes how attractive he is and accepts an invitation to see his ranch. She takes her young brother who has a developmental disability and they both develop an attraction to one another. They begin to spend time together, first as friends, then as a dating couple. Neither community, neither the Amish nor the Mennonite are happy about this possible union. As they try to determine if they can have life together tragedies occur that send messages that God wants Chris and Sadie to follow certain paths. Can Sadie and Ezra have a life together?

I enjoyed this story, although I was a bit surprised at the instalove. Sadie wants to be a dutiful daughter remain part of the Amish community, but can she still do that and follow her heart? I loved the kindness that Ezra showed to Sadie and her younger siblings. He worked hard to respect Sadie’s religious beliefs and not tempt her to do something she did not believe in, but Sadie’s desire to do different things backfired a bit. This is a sweet story about family, faith, loyalty and love. I enjoyed this quick read by Amy Lillard.

About the Book: The Amish of Wells Landing, Oklahoma, treasure their close-knit community, and the promise of their growing families. But one young woman is struggling to choose a future that is true to both her heart and her faith…

Everyone in Wells Landing has long expected Sadie Kauffman and Chris Flaud to marry–despite Sadie’s telling them differently. While she loves Chris, it is more as a friend than a husband. Yet at twenty-two, the plainest girl in her group, Sadie is also the only one who is still single. Perhaps it’s time to be practical and marry Chris–though he still has not asked. But when Sadie meets a kind, handsome Mennonite, it seems her prayers have been answered…

With Ezra Hein, Sadie at last feels the joy she nearly gave up on. Unfortunately, others only feel shock that she would consider marrying an outsider. To complicate matters, Chris has finally begun talking to Sadie about their future. Distressed, Sadie will have to search her heart to recognize God’s marvelous gifts to her–and find the courage to accept them, challenges and all…

About the Author: I’m a wife, mother, and bona fide Southern belle. Published author, expert corn bread maker, and Squirrel Princess. I live in Tulsa, though I was born in Mississippi. I moved to the Sooner State when I was seventeen and met my soul mate and best friend not long after. I’ve retained a little of my Mississippi accent though most people think I’m from Texas. (?) Rob and I have been married for over twenty years and have a son–a mom proclaimed prodigy, of course! I love homemade tacos, nail polish, and romance novels–not necessarily in that order. I’m a big fan of country music, a staunch proponent of saving the Oxford comma, and I’m shamefully obsessed with all things Harry Potter.

I believe that God is love. I guess that’s why I adore romances.

I have always been intrigued with the Amish culture, their gentle ways and slower-paced lifestyle. (And I love, love, love the fact that they stay married for their lifetime.) But until recently I never thought to blend this interest with my penchant for romance. Okay, okay, I’m a bit old-fashioned and even enjoy the gender roles that are present in this culture. I love to cook and take care of my family. Yes, that’s me June Cleaver with a laptop.