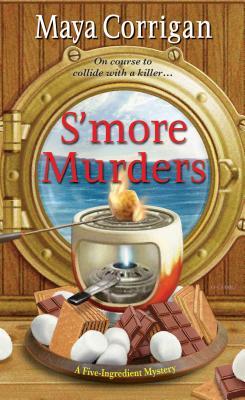 About the Book: Managing a fitness club café and collaborating on a cookbook with her grandfather are Val Deniston’s usual specialties, but she’s about to set sail into nearby Chesapeake Bay—straight into a murder case . . .

Since catering themed events is a good way to make extra cash, Val agrees to board the Titanic—or at least cater a re-creation of the doomed journey on a yacht. The owner of the yacht, who collects memorabilia related to the disaster, wants Val to serve the last meal the Titanic passengers ate . . . while his guests play a murder-mystery game. But it is the final feast for one passenger who disappears from the ship. And that’s only the tip of the iceberg. Now Val has to reel in a killer before s’more murders go down . . .

Against her better judgment, Val Deniston agrees to cater a 10-course meal on a yacht belonging to Otto Warbeck, a rich, eccentric, Titanic collector and connoisseur. It was to be served on the anniversary of the Titanic’s sinking. Her Grandfather was worried about the timing and jinx that might follow, but the money Otto Warbeck was willing to pay, convinced them to move forward with the job. They should have followed their hunches as one of the passengers disappears, they sail into a squall, and the pilot of The Abyss is drugged. Will Val be able to figure out what happened?

I enjoy the Five-Ingredient Mystery series, although this was not one of my favourites in the series. Val, her grandfather and Bethany put their sleuthing skills to use trying to determine who the murderer is as well as who drugged the pilot and why. Asking questions, making friendly visits (always with cookies) and doing some internet research, they come up with a lot of information to assist the police. I like that the police are not bumbling idiots, but they don’t seem to do a lot of active investigating. They don’t get upset with Val when she brings them information and seems to actually want to her to nose around and help them out. The mystery itself was a good one. There were a few twists that surprised me and a whole boatload of suspects. The reveal was okay, a bit of a let-down after the investigation, but still a good conclusion. I will continue reading this series as I enjoy it, but this one didn’t seem to have the same punch as previous books in this series.