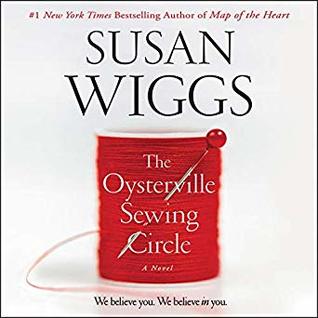 The Oysterville Sewing Circle by Susan Wiggs was a wonderful story about Caroline Shelby, her life, her friends, her love, her family and her determination. Caroline never thought she would return to her childhood home of Oysterville to live and definitely not with two children. Growing up Caroline wanted to leave Oysterville, Washington to become a famous designer in New York. She was on her way, when her mentor and boss stole her clothing line and her best friend died from an overdose leaving behind two children. Caroline had been named their guardian. With her loss and the death of her friend had Caroline had no idea how to take care of a any child, so with the encouragement of her mother, Caroline was on her way back home. But returning home will mean she will have to face her past, both the good, and the bad. Given the size of the town it will be difficult to avoid running into Will Jensen, a friend from her childhood who broke her heart when he married her best friend, Sierra.

This story is told in two timelines, the present and Caroline’s life as a teenager. I enjoyed both timelines equally and enjoyed getting to know not only Caroline, but her family and friends. Caroline is a a great character. She is one of those women that could have given up with everything that has happened to her, but she digs down and finds that strength within and picks up her life, and makes it a success. It is not easy, there are bumps along the way, hurdles to overcome, but she does it, not just for herself, but for Flick and Addie. She is also someone who cares about others and begins a group to support women who are victims of Domestic Abuse. As we get to know Will, her best friend and secret crush from her youth, I want to slap him. He gave up a wonderful woman for her best friend who was a bit flighty and somewhat selfish, although if that had not happened, they would not be where they are now. The secondary characters, her family and friends, support and encourage her which adds to the story.

I really enjoyed this book. It handles some heavy topics, primarily domestic abuse, in a way that is easy to take in and not feel overwhelmed by the message. It also deals with date rape as a form of domestic abuse as well as assault. This is a story for women, about women and about love, and not just following our passions, but finding them as well. It shows us that even when we think there is nothing left for us and we are doomed to live the life that we have been thrust into, that there is something else, other opportunities and people to help us if we have the strength and are willing to take the chance to move on. I definitely recommend this book to those who enjoy an empowering story of friendship and new beginnings.

I listened to this book and enjoyed the narration by Khristine Hvam. She is a wonderful narrator and her performance added much to my enjoyment of the book. She gave voice to the various characters, especially Caroline and Will. The story flowed for me and I will definitely look for more books narrated by Khristine Hvam. The publisher, HarperAudio, generously provided me with a copy of this book upon request. The rating, ideas and opinions shared are my own.

About the Book: The #1 New York Times bestselling author brings us her most ambitious and provocative work yet—a searing and timely novel that explores the most volatile issue of our time—domestic violence.

At the break of dawn, Caroline Shelby rolls into Oysterville, Washington, a tiny hamlet at the edge of the raging Pacific. She’s come home. Home to a place she thought she’d left forever, home of her heart and memories, but not her future. Ten years ago, Caroline launched a career in the glamorous fashion world of Manhattan. But her success in New York imploded on a wave of scandal and tragedy, forcing her to flee to the only safe place she knows. And in the backseat of Caroline’s car are two children who were orphaned in a single chilling moment—five-year-old Addie and six-year-old Flick. She’s now their legal guardian—a role she’s not sure she’s ready for.

But the Oysterville she left behind has changed. Her siblings have their own complicated lives and her aging parents are hoping to pass on their thriving seafood restaurant to the next generation. And there’s Will Jensen, a decorated Navy SEAL who’s also returned home after being wounded overseas. Will and Caroline were forever friends as children, with the promise of something more . . . until he fell in love with Sierra, Caroline’s best friend and the most beautiful girl in town. With her modeling jobs drying up, Sierra, too, is on the cusp of reinventing herself.

Caroline returns to her favorite place: the sewing shop owned by Mrs. Lindy Bloom, the woman who inspired her and taught her to sew. There she discovers that even in an idyllic beach town, there are women living with the deepest of secrets. Thus begins the Oysterville Sewing Circle—where women can join forces to support each other through the troubles they keep hidden.

Yet just as Caroline regains her creativity and fighting spirit, and the children begin to heal from their loss, an unexpected challenge tests her courage and her heart. This time, though, Caroline is not going to run away. She’s going to stand and fight for everything—and everyone—she loves.