Audiobook Review: Beneath the Tamarind Tree: A Story of Courage, Family, and the Lost Schoolgirls of Boko Haram by Isha Sesay

I recently read a review on a book called Buried Beneath the Baobab Tree by Adaobi Tricia Nwaubani on A Haven For Book Lovers. This book was about the kidnapping of the Nigerian girls from the Government School in Chibok, Nigeria. After reading the review, I wanted to read it as well. Well, I went looking for this book and somehow switched the title around in my mind. I found another book about the same event, and that is the one I will be reviewing. I apologize in advance for my long review, but this book really spoke to me. 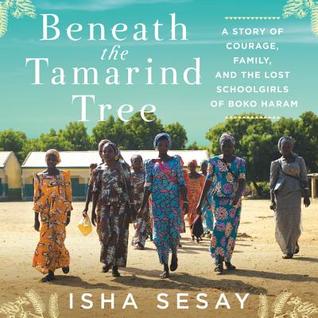 Beneath the Tamarind Tree: A Story of Courage, Family, and the Lost Schoolgirls of Boko Haram by Isha Sesay

Synopsis: “It is no accident that the places in the world where we see the most instability are those in which the rights of women and girls are denied. Isha Sesay’s indispensable and gripping account of the brutal abduction of Nigerian schoolgirls by Boko Haram terrorists provides a stark reminder of the great unfinished business of the 21st century: equality for girls and women around the world.”— Hillary Rodham Clinton

The first definitive account of the lost girls of Boko Haram and why their story still matters—by celebrated international journalist Isha Sesay.

In the early morning of April 14, 2014, the militant Islamic group Boko Haram violently burst into the small town of Chibok, Nigeria, and abducted 276 girls from their school dorm rooms. From poor families, these girls were determined to make better lives for themselves, but pursuing an education made them targets, resulting in one of the most high-profile abductions in modern history. While the Chibok kidnapping made international headlines, and prompted the #BringBackOurGirls movement, many unanswered questions surrounding that fateful night remain about the girls’ experiences in captivity, and where many of them are today.

In Beneath the Tamarind Tree, Isha Sesay tells this story as no one else can. Originally from Sierra Leone, Sesay led CNN’s Africa reporting for more than a decade, and she was on the front lines when this story broke. With unprecedented access to a group of girls who made it home, she follows the journeys of Priscilla, Saa, and Dorcas in an uplifting tale of sisterhood and survival.

Sesay delves into the Nigerian government’s inadequate response to the kidnapping, exposes the hierarchy of how the news gets covered, and synthesizes crucial lessons about global national security. She also reminds us of the personal sacrifice required of journalists to bring us the truth at a time of growing mistrust of the media. Beneath the Tamarind Tree is a gripping read and a story of resilience with a soaring message of hope at its core, reminding us of the ever-present truth that progress for all of us hinges on unleashing the potential of women.

Remember the tag #BringBackOurGirls? Do you remember hearing and seeing in the news the story of the 270 Nigerian school girls who were kidnapped by Boko Haram several years ago? As news stories do, this event eventually was replaced by other stories, which is so sad because 112 of these girls are still missing. 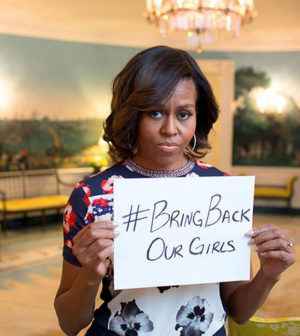 Once Michelle Obama used the hashtag, it went viral.

On April 14, 2014, terrorists from the Islamic group Boko Haram invaded the small town of Chibok in northeastern Nigeria. There, they found 276 girls in the dorms at the Government Girls Secondary School and forced them to leave the school and come with them. Boko Haram spoke out against Western education, education for girls, and democracy, and the Chibok school wasn’t the first they’d targeted, but the first to be met with international outrage. During a multi-day trek, the armed militants led the girls, by foot and in trucks, through the Sambisa Forest. Some of the girls escaped by jumping out of the vehicles and other snuck off when they were in the forest taking a bathroom break. The rest were taken to a camp and left under a tamarind tree which would be their home for months. Back in Chibok, families were beside themselves with grief, but didn’t have the money or political connections to pressure the government to search for their girls. Isha Sesay, a CNN anchor and native of Sierra Leone was one of the first journalists to cover the event, and even when other journalists and networks lost interest in the girls, her attention never waned.

Sesay’s account centres on four of the kidnapped girls. We get to know them, their hopes and dreams, as well as their families and their grief. Through private interviews with the girls we learn about the horrendous conditions these girls endured such as beating, hunger, forced marriages, forced conversion to Islam and mental anguish. The majority of the girls that were kidnapped were Christian. It amazed me to read about the strength of faith these young girls had. When asked why she did not convert to Islam, one of the girls responded that without Christ in her life, she may as well be dead. It was what sustained them for so long. 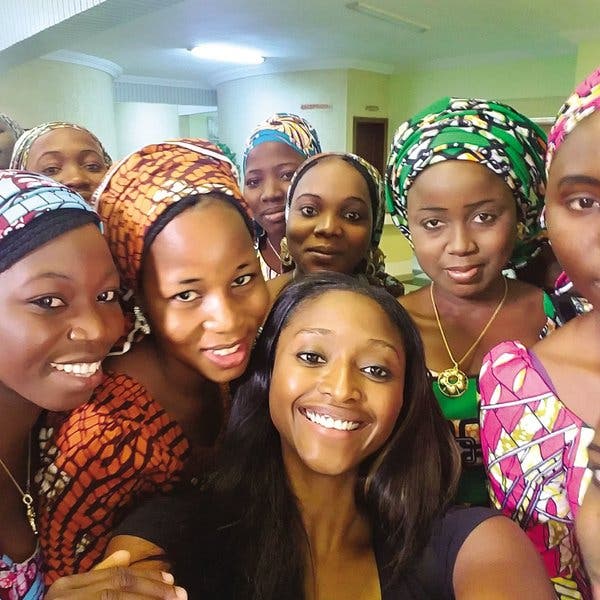 Isha Sesay with some of the released schoolgirls she interviewed.

Sesay alternates between telling the story of the kidnapped girls, her own story, and providing information related to the politics of Nigeria. She shares the Nigerian government’s inaction, with President Jonathan and later administrations using the kidnapping as a political tool rather than trying to rescue the girls. At one point they said they had all been returned home, at another they said it was a hoax to undermine the government. I will say that I did not enjoy Sesay’s personal story as much as the girls, but it is important to see that only a woman from Sierra Leone, despite her own personal issues and tragedies, continued to push to have this story in the forefront of the news. She felt is was important for her to pursue this as she says that this could have been her story, if it had not been for her privileged upbringing. The sad thing for me is that if these girls had come from wealthy or important families, they would have been found and brought home sooner. At this time, there are still 114 girls unaccounted for. Are they dead? Are they living willingly with the Boka Haram or are they still captives? Will the world ever know?

I listened to the audiobook of Beneath the Tamarind Tree and I did enjoy it, but with a few reservations. The book is narrated by the author, Isha Sesay. I know that this is nonfiction, but there were times I felt that I was being lectured. Had another narrator been selected to read this book, it might not have been as noticeable. I am definitely glad that I listened to this rather than read it though, as I think I might have put it aside and not finished this important story. The publisher, HarperAudio, generously provided me with a copy of this book upon request. The rating, ideas and opinions shared are my own.

12 thoughts on “Audiobook Review: Beneath the Tamarind Tree: A Story of Courage, Family, and the Lost Schoolgirls of Boko Haram by Isha Sesay”