The Kommandant’s Girl was written in 2007, but was recently released as an audiobook and I jumped at the opportunity to listen to this one. The story revolves around nineteen-year-old Emma Bau, a Polish Jewess, in war-torn Poland. After being married for only a few weeks, her husband flees to work in the Polish underground. When Anna’s family is rounded up to live in the ghetto, she is recruited to work with the resistance as well. She is given a new identity as Anna, a young Jewish boy to raise as her orphaned brother and ends up taking a job as the personal assistant to the Kommandant. Anna’s job is to steal passes, locate secret papers and pass information on to the resistance. To achieve this she ends up in a personal relationship with the Kommandant.

I absolutely loved the character of Emma/Anna. She was young and in love as well as a bit naive, but was willing to do what she could to help her husband and the resistance. She was kind, yet determined to help and she struggled with what she was doing as well with how her relationship with the Kommandant was developing. Her feelings betray her, she is confused about how she feels about the Kommandant, she is in turmoil. There are other secondary characters that we get to know briefly who are also an important part of this story. The setting of this story is not in the camps, but in the headquarters in Krakow, so it is not centered on the atrocities, but the resistance and what they risk to help others. Their courage and bravery is awe-inspiring. I always hesitate to say I enjoy these stories, but I find it interesting to read about war-time resistance groups and how they secretly planned Nazi sabotage. I am confident in recommending this book to lovers of historical fiction, especially WWII stories. I am looking forward to reading/listening to The Diplomat’s Wife, the second book in this series.

Pam Jenoff has written a historical fiction story that is full of suspense and emotion. The setting, characters and details were interesting and unforgettable. I had a hard time getting anything done while listening to this one. The narration made the story come alive for me. Narrator, Nancy Peterson performs this story with emotion. She gives an individual voice not only to Emma/Anna but the Kommandant, his secretary and more. The accents were well done and made this book feel like I was listening to multiple narrators. I will definitely look for more books narrated by this talented voice. I definitely recommend this audiobook to those who enjoy audio versions of stories. I received a copy of this audiobook from the publisher upon my request. The rating, ideas and opinions shared are my own. 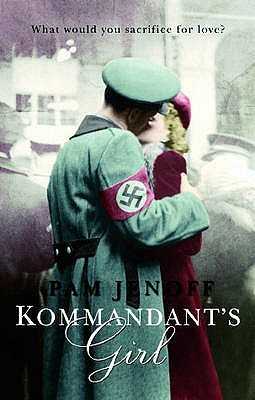 About the Book: Bestselling author Pam Jenoff shows the unimaginable sacrifices one woman must make in a time of war.

Nineteen-year-old Emma Bau has been married only three weeks when Nazi tanks thunder into her native Poland. Within days Emma’s husband, Jacob, is forced to disappear underground, leaving her imprisoned within the city’s decrepit Jewish ghetto. But then, in the dead of night, the resistance smuggles her out. Taken to Krakow to live with Jacob’s Catholic aunt, Krysia, Emma takes on a new identity as Anna Lipowski, a gentile.

Emma’s already precarious situation is complicated by her introduction to Kommandant Richwalder, a high-ranking Nazi official who hires her to work as his assistant. Urged by the resistance to use her position to access details of the Nazi occupation, Emma must compromise her safety-and her marriage vows-in order to help Jacob’s cause. As the atrocities of war intensify, Emma must make choices that will force her to risk not only her double life but also the lives of those she loves.