The Last Year of the War by Susan Meissner, Kimberly Farr (Narrator ) 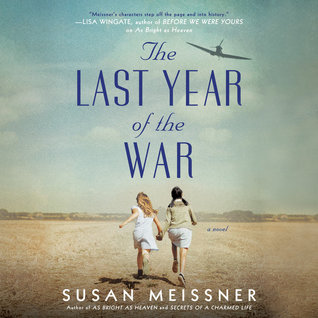 The Last Year of the War by Susan Meissner, Kimberly Farr (Narrator )

This was an aspect of the history involving WWII that I had heard about, but did not know a lot about. The idea of interning people who had lived in the US for 20 years, as enemies of the country is awful. As I listened to this book, I felt for the parents of Elise and Mariko, they were the victims in this book, although not the main characters. This was not a story about the war itself, but about its impact on the people affected for many years after the war ended.

Elise Sontag was a teenager in Iowa when the war broke out. Her parents were from Germany, although had been living in the US for 20 years. Unfortunately, they were not citizens so her father was arrested as a Nazi Sympathizer. Her mother could not bear to be apart, so they requested that the whole family be together and ended up in Texas in an internment camp. Elise felt imprisoned and hated what was going on. The one bright spot was meeting Mariko, a member of a Japanese family also interred. As the girls get separated, they move on with their lives, never forgetting about each other and their dreams for the future.

I enjoyed this book. It was a dual-timeline story with Elise as the narrator. She now has alzheimers and wants to catch up with Mariko before “Agnes” steals away all her memories. We learn about their past through Elise’s memories, which were enlightening to me. This is not an action packed story, it is a sad story about a terrible time in history. Even far away in the US, the fear of the Nazis, Japanese and Italians was very real. There were also camps in Canada which surprised me when I did some further research into this time. If you enjoy stories about how the everyday citizen was affected during WWII, then pick up this book.

I listened to this book and was a bit disappointed by the narration. Kimberly Farr read this story very, very slowly. I had to speed it up more than normal to enjoy it. Once I did that, the story flowed well for me. Some of the pronunciations were also suspect to me, but overall, it was a decent narration.

About the Book: Elise Sontag is a typical Iowa fourteen-year-old in 1943–aware of the war but distanced from its reach. Then her father, a legal U.S. resident for nearly two decades, is suddenly arrested on suspicion of being a Nazi sympathizer. The family is sent to an internment camp in Texas, where, behind the armed guards and barbed wire, Elise feels stripped of everything beloved and familiar, including her own identity.

The only thing that makes the camp bearable is meeting fellow internee Mariko Inoue, a Japanese-American teen from Los Angeles, whose friendship empowers Elise to believe the life she knew before the war will again be hers. Together in the desert wilderness, Elise and Mariko hold tight the dream of being young American women with a future beyond the fences.

About the Author: Susan Meissner was born in San Diego, California, the second of three. She spent her childhood in just two houses. Her first writings are a laughable collection of oddly worded poems and predictable stories she wrote when she was eight.

She attended Point Loma College in San Diego, and married her husband, Bob, who is now an associate pastor and a chaplain in the Air Force Reserves, in 1980. When she is not working on a new novel, she is directing the small groups ministries at The Church at Rancho Bernardo. She also enjoy teaching workshops on writing and dream-following, spending time with my family, music, reading great books, and traveling.

10 thoughts on “The Last Year of the War by Susan Meissner, Kimberly Farr (Narrator )”