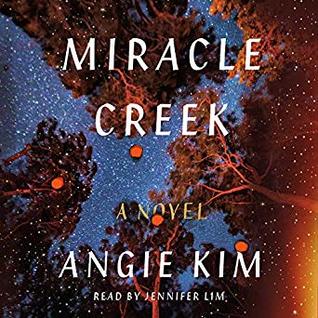 This was a terrific debut novel by Angie Kim. I really enjoyed this book and am awaiting to read whatever she follows it up with. I had read several positive reviews and wanted to read this one, but I am always worried that a book will not live up to the hype, no worry here. This was a well-written courtroom drama that flashed back to what had happened two years prior.

There are many themes in this novel, but the author does a wonderful job of blending them all together. There are family relationships, secrets, mothers and children, guilt, love, sense of duty, issues facing immigrants, autism, and more. As the story unfolds, we read/hear about varying versions of what happened. Who is telling the truth? Digging into a person’s past, and analyzing statements taken out of context can sway anyone’s thinking of a suspect, whether true or not, is that right? I was pulled in right from the first page and this book had me googling treatments of HBOT along the way. I do not want to give the story away, so will leave it here. This was a unique, thought-provoking, and engaging read. This book would be an amazing book club selection as there are so many things to discuss.

If you get a chance to listen to the audiobook, I definitely recommend that. It was excellent and held my attention, often stopping whatever else I might have been doing to listen carefully. Make sure you listen to the interview at the end, it was very enlightening as well.

About the Book: A literary courtroom thrilled about an immigrant family and a young single mother accused of killing her autistic son, Miracle Creek is a powerhouse debut about how far we’ll go to protect our families, and our deepest secrets.

In rural Miracle Creek, Virginia, Young and Pak Yoo run an experimental medical treatment device known as the Miracle Submarine. A pressurized oxygen chamber that patients enter for therapeutic “dives,” it’s also a repository of hopes and dreams: the dream of a mom that her child can be like other kids; the dream of a young doctor desperate to cure his infertility and save his marriage; the dream of the Yoos themselves, Korean immigrants who have come to the United States so their teenage daughter can have a better life.

When the oxygen chamber mysteriously explodes, killing two people, all these dreams shatter with it, and the ensuing murder trial uncovers imaginable secrets and lies. In Miracle Creek, Angie Kim takes a classic form—courtroom drama—and draws on her own experience as an immigrant, a lawyer, and the mother of a real-life “submarine” patient to turn it into something wholly original, unputdownable . . . real. This is a spellbinding novel by an exciting new voice.

About the Author: Angie Kim is the debut author of the national bestseller Miracle Creek, a literary courtroom drama that has been named a LibraryReads Selection, an IndieNext pick, an Amazon Best Book of the Month, a Book of the Month Club selection, and Apple Books’ Top 2019 Debuts, as well as named a best book by Time, People, Entertainment Weekly, Elle, and Real Simple. Her writing has appeared in Vogue, The New York Times, The Washington Post, Glamour, Salon, and Slate. She moved from Seoul, Korea, to Baltimore as a preteen, and attended Stanford University and Harvard Law School, where she was an editor of the Harvard Law Review, then practiced as a trial lawyer at Williams & Connolly. She lives in Northern Virginia with her husband and three sons.