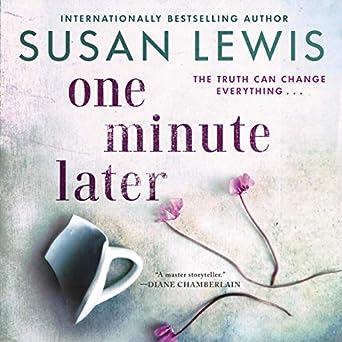 This is the first Susan Lewis book I have read and it will not be the last. Talk about an emotional roller coaster. This was a story about second chances, mistakes, taking a chance on love, loss and reaching out. When the story starts, it seems like there are two separate stories going on. The first is in the present and is from the POV of Vivienne, who has recently developed heart failure and is waiting for a donor heart. She has returned home to Kesterly to convalesce while waiting for a possible transplant. Spending time with her mother has her reminiscing about her childhood and wondering why her mother would never tell her who her father was. The second POV is from Shelly, a happily married woman and mother who is living on a farm with her vet husband and children in the 1980s. When tragedy strikes, the family is changed forever. Eventually these two families, their heartaches and tragedies come together as one.

This is a beautifully written story with likeable characters. It is also a very emotional story that had me laughing and crying throughout. The most important thing about this story is the message of organ donation. With Vivienne waiting for a donor heart, you learn about the crisis in donors, the push to get more people to register and the devastation when someone does not survive because of lack of a donor. A very important message indeed, but told wrapped up in a wonderful story. I definitely recommend this one.

I was fortunate to listen to the audiobook of One Minute Later narrated by Antonia Beamish, Elisabeth Hopper, and Imogen Wilde. I enjoyed the multiple narrators as they gave distinct voices to the characters. This book was well performed and I enjoyed sitting back and listening as the story unfolded. The emotions and expression given to the characters allowed me to picture them and feel like they were telling me this story. Very well done. I received an audiobook from Harper Audio upon request. The rating, ideas and opinions shared are my own.

Listen to a sample

About the Book: Internationally bestselling author Susan Lewis’ riveting, unforgettable novel of a woman whose life changes in an instant and the handsome young man with whom she shares a secret history-perfect for readers of Jodi Picoult, Diane Chamberlain, and Susan Wiggs.

How well do you know the people you love? For one young woman returning to the past, the answer could be heart-shattering…

Vivi Shager is living her dream. Raised with drive and ambition by a resolutely single mother, Vivi has a thriving law career, a gorgeous apartment in London, and a full calendar that keeps her busy at work and at play. Then on the day of her twenty-seventh birthday, an undiagnosed heart condition sends Vivi’s prospects for the future into a tailspin. After escaping her roots nearly a decade ago, she’s forced to return to her childhood home to be cared for by her devoted and enigmatic mother. Vivi has always known the woman is hiding something and now she’s determined to find out what it is. Though her condition makes her fragile and vulnerable and she’s afraid of what may happen, her spirit remains strong. Then comes an unexpected ray of light.

Josh Raynor, a local veterinarian who his sisters claim is too handsome for his own good, brings a forbidden love to Vivi’s world. Josh and Vivi are soon inseparable, unaware of the past their families share. All Vivi knows is that Josh is wrestling with a demon of his own…

Then quite suddenly the awful truth is staring Vivi in the face and it changes everything.

2 thoughts on “One Minute Later: A Novel by Susan Lewis, Narrated by Antonia Beamish, Elisabeth Hopper, and Imogen Wilde”