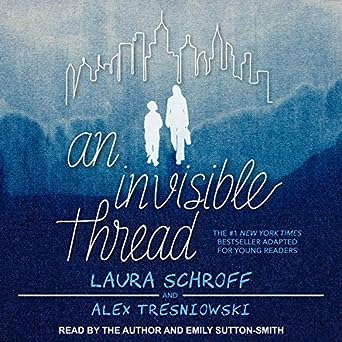 This is an amazing story of two people who just happen to meet on the streets of New York and embark on a relationship that spans years and saves them both. Was this a coincidence or were they meant to strike up this friendship? The author calls it an invisible thread that connects certain people who are meant to make a difference in another one’s life. This is the true story of Laura Schroff and Maurice, a young boy. Laura came from humble beginnings, but made a success of herself. She works in New York City, where she meets 11 year old Maurice, an African American boy who is living in a basically condemned building with his grandmother, mother and several uncles. When Maurice asks her for some change for food, she takes him to McDonald’s instead. So begins their weekly dinner dates and an unlikely friendship that spans decades.

The story of Laura and Maurice was written as nonfiction for adults, and became a New York Times bestseller. An Invisible Thread: A Young Readers’ Edition, is an adaptation of the original story. This is a powerful story of compassion, acceptance, and unlikely friendship. There is still so much homelessness, hunger and neglect of children today, that this story is as relevant today as when it happened. This is a book that should be in every school library. I definitely recommend this book.

I was fortunate to have the opportunity to listen to the audiobook of this story narrated by Laura Schroff and Emily Sutton-Smith. I always enjoy books narrated by the author. They know where to add expression and intonation. Emily Sutton-Smith presents distinct, childlike voices and I did not realize that the voice of Maurice was being spoken by a female. I enjoyed sitting back and listening to this story. It was a relatively short story that I enjoyed spending the day listening to. The publisher generously provided me with this audiobook upon request. The rating, ideas and opinions shared are my own.

About the Book: From New York Times bestselling authors Laura Schroff and Alex Tresniowski comes the young readers edition of a memoir about an unlikely friendship that forever changed the lives of a busy sales executive and a homeless eleven-year-old boy.

On one rainy afternoon, on a crowded New York City street corner, eleven-year-old Maurice met Laura. Maurice asked Laura for spare change because he was hungry, and something made Laura stop and ask Maurice if she could take him to lunch.

Maurice and Laura went to lunch together, and also bought ice cream cones and played video games. It was the beginning of an unlikely and magical friendship that changed both of their lives forever.